Researchers are working with government agencies around the world to dismantle the abundant nuclear stockpile and turn them into nuclear fuel. In today's world, there is a growing concern over the threat of nuclear war. In history, nuclear warheads have only been used in war two times- both from the US, and both proved incredibly devastating and deadly.

Since World War II, many countries around the world began to develop programs to build weapons of mass destruction, many with malicious intent. The geopolitical tension after WWII prompted the production of tens of thousands of nuclear weapons. Thankfully, since then, most have been dismantled. However, instead of wasting the radioactive isotopes within the weapons, governments around the world are turning nuclear weapons into nuclear fuel. 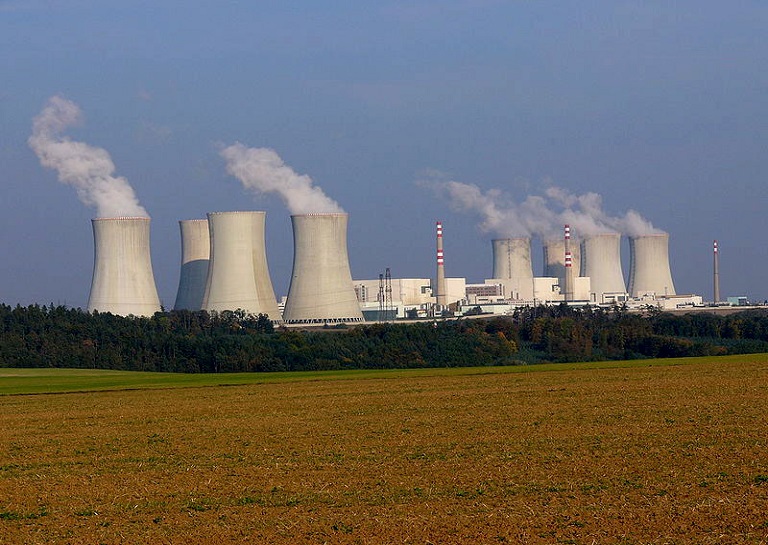 In the 1970's, the world's global warhead inventory staggered over 70,000 weapons. Since then, there has been an ongoing push to eliminate weapons of mass destruction (WMD). Over the years, more than 55,000 nuclear weapons have been dismantled. Despite the efforts, an estimated 14,900* nuclear warheads remain active in the world. Nuclear weapons pose an imminent threat to all life forms on Earth.

Currently, efforts continue to eliminate the production of nuclear weapons. Although, the stockpiles still remain an active threat to all of humanity. Fortunately, governments around the world are collaborating to dismantle thousands of weapons. Much of the fuel will be and has already been used to power nuclear power generators. It is an ongoing effort that is showing significant reductions in the number of WMD's. The World Nuclear Association states,

Since 1987 the United States and countries of the former USSR have signed a series of disarmament treaties to reduce the nuclear arsenals by about 80%.

For obvious reasons, an abundance of nuclear weapons in the world has the potential to result in an utterly vile catastrophe. Currently, the world exists in a state of mutually assured destruction. Should any country use nuclear weapons, a retaliative nuclear strike is imminent. Today, missiles bearing nuclear warheads are no longer bound to secret underground silos. The weapons are mobile and are strategically placed around the world. Carried on planes, boats, submarines, or otherwise, there is no way for a government to disable another country's nuclear arsenal with one attack.

Recognizing the predicament, many countries are disassembling their nuclear weapons. However, instead of wasting the highly radioactive material inside, the material is being used to power nuclear power plants.

Completed in 2013, the United States-Russia Highly Enriched Uranium Purchase Agreement, popularly referred to as the Megatons to Megawatts Program, was an agreement that oversaw the dismantlement of over 20,000 nuclear weapons. Proposed during the 1990's, the program "Megatons to Megawatts" would oversee the conversion of weapons of mass destruction to usable energy for civilian use.

Weapons-grade uranium is highly enriched to levels of over 90% concentrations of U-235  (the fissile isotope). Weapons-grade plutonium (Pu-239) stagers over 93% purity. Its unstable properties make it highly radioactive, giving it the potential to heat up to critical temperatures. The elevated temperatures result in more nuclear reactions within the Uranium. As a result, more radiation is released. The HEU is ideal for weapons since it can react incredibly violently, resulting in a decimating atomic blast.

The instability is necessary to create the infamous explosions nuclear weapons are renowned for. However, the concentration is far too great for commercial nuclear power plants to handle safely. To be converted into nuclear fuel, the HEU must be diluted.

Before reaching the reactor, enriched Uranium must be diluted to lower its temperatures, making the isotope less reactive. The procedure involves blending the weapon-grade material with already spent nuclear fuel. The highly enriched uranium (HEU) of over 90% is taken down to just 5% enrichment. The addition of extra material prevents the uranium from dangerously overheating, causing more fission, and more ionizing radiation

The process begins at the nuclear weapon. The HEU metal must be carefully removed from a warhead. The process is extremely dangerous and requires precision machines to dismantle and handle the radiative material. The radiation is far too great for a human to perform the operation. Once extracted, the metal is machined into shavings where it can then be oxidized.

Uranium is highly soluble, meaning it easily dilutes in water. However, in an oxidized state, it becomes insoluble. In preparation for shipping, uranium must be oxidized so, in the event of a leak, the radioactive isotope will not leach and contaminate water sources. After oxidizing, the Uranium is fluorinated. 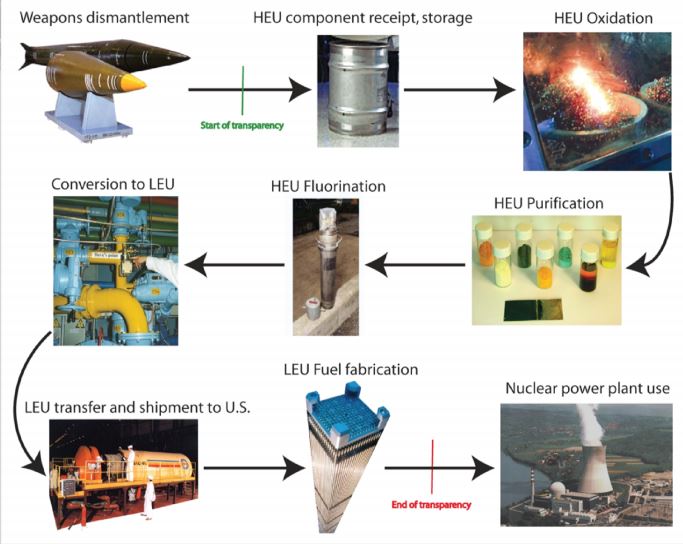 Once dismantled and diluted to a safe operating temperature, the radioactive material that was once housed in a nuclear weapon can be used inside a nuclear power plant. For the last two decades, using dismantled nuclear weapon material has become an integral part of energy production in the United States.

The materials salvaged from the bombs for energy production at the time accounted for 50% of the nuclear fuel and about 10% of the electricity produced in the United States.

“It’s a great, easy source” of fuel, says Marina V. Alekseyenkova, an analyst at Renaissance Capital and an expert in the Russian nuclear industry.

Over the 20 year period, the program generated an energy equivalence of over 200 million tons of fossil fuels. The budget of Megaton to Megawatt program was accumulated US $13 billion, double the amount of money that was produced from the energy obtained from the recycled material. Economically, the project failed. However, it was never intended to act as a means of revenue.

Instead, the program served as a revolutionary platform to rid the world of the plethora of nuclear weapons left over from the Cold War. With over 500 metric tonnes of HEU removed from nuclear arsenals, the project oversaw the dismantlement of nearly 20,000 nuclear weapons. As a result, it is considered as one of the world’s most successful nuclear threat reduction programs.

The Megatons to Megawatts agreement served as proof that countries can resolve differences in lieu of greater economic and political interest. Shifting the use of radioactive material from bombs to energy production presents an incredible alternative to curb the proliferation of nuclear warheads.

One Bomb can Power a City for Hours

In the year of 2015, the United States still held approximately 2000 deployed warheads, 2000 reserve warheads, and 2000 waiting to be dismantled.

According to a study conducted by a Standford University student, Nikolas Martelaro, just one bomb has enough energy to supply a city for hours. Converting the energy of the bomb dropped on Nagasaki (named Fat Man) into pure energy yields 8.4 × 1013 Joules. If just 66% of the energy can be harvested as heat, the bomb has enough energy to supply the Los Angeles metropolitan area with power for 1.1 hours.

Using the same conversations, Martelaro estimates that if the energy from the USA's deployed arsenal is reclaimed as electricity, the energy is sufficient enough to power LA for almost 8 years.

The US and Russia still hold thousands of more nuclear weapons awaiting disarmament and others that are kept as spares. Using a fraction of the world's nuclear stockpile could power the world for many years to come- if countries are willing to partake.

Although the Megaton to Megawatt program successfully oversaw the dismantlement of tens of thousands of bombs, without the willingness of other countries to partake in similar programs, the world's nuclear arsenal will still remain in large quantities. However, it should remain in the hands of Russia and the United States to lead similar initiatives. According to a study conducted by Stanford University,

"The United States' 7,260 warheads and Russia's 7,500 warheads combine to comprise more than 90% of the world's nuclear weapons." The paper continues, "The roughly 2,000 operational warheads that each country deploys are more than sufficient to obliterate the planet."

Without the formation of a nuclear pact to dismantle nuclear weapons, it is unlikely that countries, especially ones other than the USA and Russia, will actively reduce their nuclear weapon arsenals with the intention to generate electricity. Although with the constant discouragement of new nuclear development, it is likely there will not be a need for such an extensive nuclear disarmament pact on the similar scale of the Megaton to Megawatt agreement.

The topic of nuclear science is heavily debated and often scrutinized by the general public. However, it is a critical component of today's modern society. From metal detectors, fire alarms, medical equipment to power generation, nuclear science is an integral part of the functionality of modern day civilization.

Though there are many stigmata associated with nuclear science, nuclear power remains a reliable and safe alternative to fossil fuel production. Although, in history, there have been a handful of accidents revolving around nuclear reactors. The two most prominent mishaps, that of Chyrnoble and Fukushima, were both a result of strict violations of protocol that are in place to prevent such disasters. The reactors were outdated and government agencies ignored strong recommendations to improve safety and backup measures.

When employed responsibly, nuclear power generation is an effective means of energy production. In the United States, it accounts for approximately 20% of the total energy production. However, advancements still must be made to house the radioactive waste that is produced. The technology is far from perfect, although for more than half a century it has provided a substantial amount of electricity around the world.

In the future, it is more than likely the topic of nuclear power generation will likely be scrutinized for many years to come. However, the technologies should be scrutinized so improvements can continue to be made.

Though the stigma remains, nuclear reactors have contributed in ridding the world of  20,000  nuclear weapons.  However, it will take significantly more effort to further reduce the world's nuclear stockpile. Fortunately, it remains on the decline, but with rising tensions building around the world, one can only hope that a project as extensive as the Megaton to Megawatt program will not be necessary again.