A paper published in Nature Communications is revealing the mysteries of the oldest bubonic plague known to mankind.

A paper published in Nature Communications by a team from the Max Planck Institute for the Science of Human History is revealing the mysteries of the oldest bubonic plague known to mankind. The strain is believed to be responsible for some of the world's most notorious pandemics such as the Justinian Plague and the appropriately-named Black Death.

The researchers were successful in decoding the genome of this ancient disease due to a discovery of two 3,800-year-old skeletons in Russia. The individuals were found in a double burial in the Samara region and were both carriers of the same strain of the bacterium responsible for the bubonic plague called Yersinia pestis.

To this day, scientists have been unable to determine where and when Yersinia pestis acquired the genetic disposition that makes it so adept at colonizing and spreading through fleas. Other studies of ancient Yersinia pestis had pinpointed its earliest known variants to the Late Neolithic and Early Bronze Age.

However, these variants did not have the genetic traits to ensure survival in fleas that make the plague so resilient. Lucky for the researchers, the strain discovered in the Samara skeletons did.

"This strain has all the genetic components we know of that are needed for the bubonic form of the disease. So plague, with the transmission potential that we know today, has been around for much longer than we thought," "said Kirsten Bos of the Max Planck Institute for the Science of Human History in a statement.

Combining this new genome with previously sequenced strains, the team calculated the age of the bubonic plague to be at around 4,000 years. “Our Y. pestis isolates from around 4,000 years ago possessed all the genetic characteristics required for efficient flea transmission of plague to rodents, humans and other mammals,” said the first author of the study Maria Spyrou. 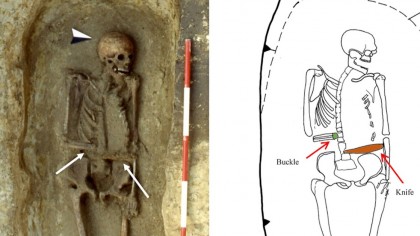 The study debunks previous research that stipulated that a single lineage of Yestina pestis existed in Eurasia during the Bronze Age, revealing that there were at least two strains at the time. Johannes Krause of the Max Planck Institute for the Science of Human History said that more research needs to be done to determine how prevalent each lineage was and what role human activities played in their spread.

“Additional Bronze Age and Iron Age plague genomes could help pinpoint key events that contributed to the high virulence and spread of one of humankind’s most notorious pathogens,” Krause added. The disease still devastates populations in the world today.

Most recently, a pneumatic plague took over in Madagascar killing over 200 people. The World Health Organisation was quick to intervene but warned that more infections would continue until the end of plague season in April.