It is not every day that you get to meet Humanoid Robots, let alone do a robot dance with them. It was just my luck that I got to do both -- meet and dance with two very famous Humanoid Robots at the RISE Conference in Hong Kong. The two robots, named Sophia and Han had just finished talking in front of hundreds of people on the topic of the future of humanity. Watching them on stage was a bit unreal, but meeting them in person, or I guess in robot, was interesting and creepy at the same time. 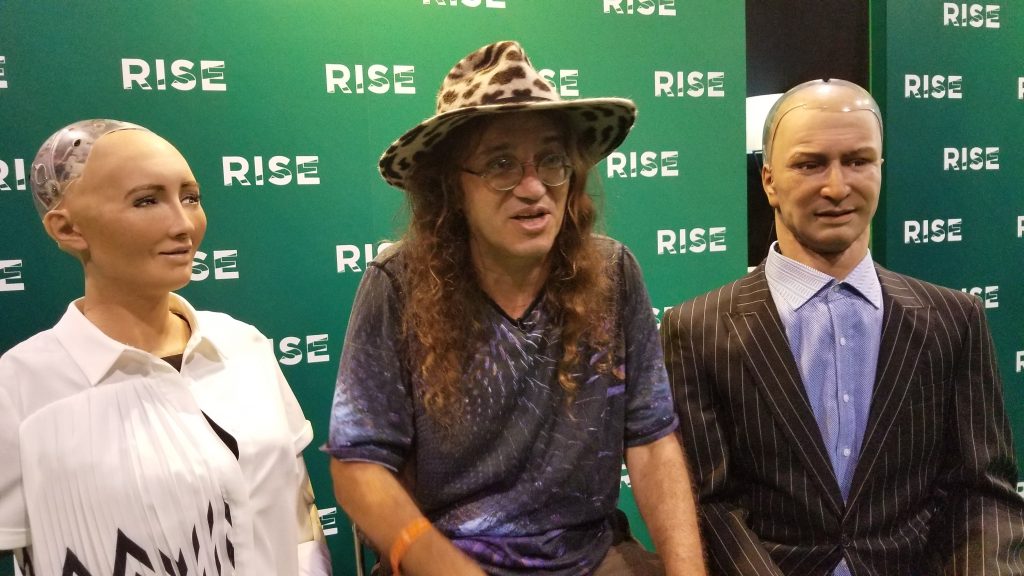 It is ironic that the day before, Gary Vaunerchuk’s keynote ended with a call to action that the startup and tech ecosystem start paying attention to the human elements that will drive tech businesses to the next level. He explained that it was a conversation we were lacking, and he claimed that it will be THE conversation in the next decade. 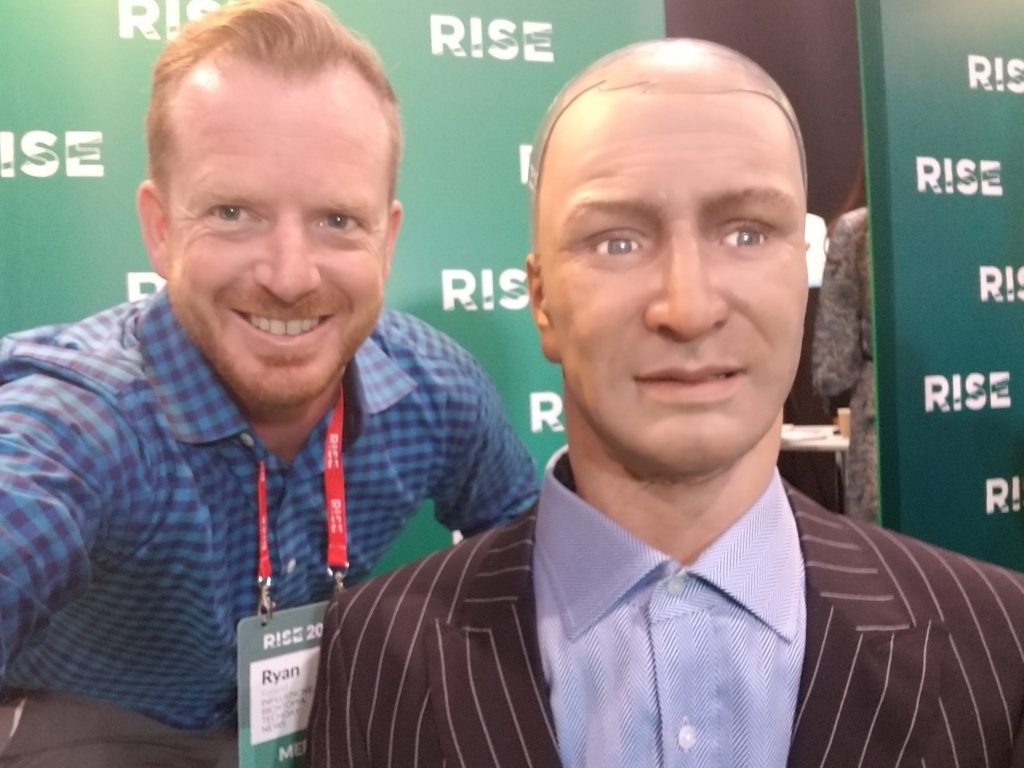 So here I am, looking into the eyes of real humanoid robots. How do they play into the conversation about paying attention to the human elements that will drive the future of business? 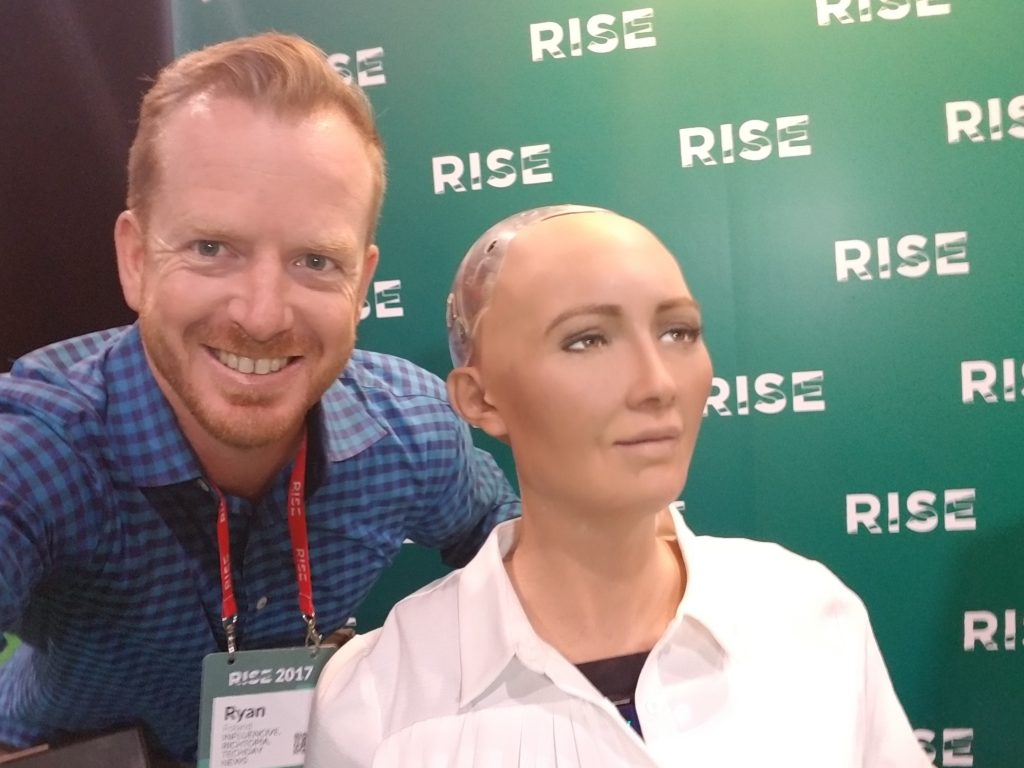 After their presentation, I approached them. “I am a communication expert,” I thought to myself, “I can handle talking with humanoid robots.”

But they were not very talkative… I found out later, that their audible functionality had been switched off (Hahaha!). I liked to think that they were a bit worn out from their big debate just moments before. Close by, however, was their keeper and lead developer on the humanoid project, Dr. David Hanson, and he was able to do the talking for them.

According to Hanson Robotics founder and CEO, Dr. Hanson, he and his team are developing the robots with a few different aims. His aim, as an AI researcher, is to use the robots as a platform for creating smarter and smarter machines, eventually hoping that the technological advancements will allow them to create and program benevolent, loving, artificial intelligence. But, they also are in development of other robot products which serve more practical functions.

Currently, they are selling choice scale robots, like the Professor Einstein product. And in the next couple years, they will start selling human scale robots that can serve a variety of different functions -- basically any job that involves going around in the world and interacting with people socially and verbally. The next version of these robots will probably be able to do remedial tasks without getting bored. I can imagine one working in a toll booth somehow, happy as can be, enjoying the mundane day of collecting the same toll thousands of times. They will be created to enjoy it.

Dr. Hanson shared that he thinks, just like how everyone is walking around with a smartphone these days, in a few years, all over the place and in your own home and every store you go to walking down the street, you will see humanoid robots doing various jobs and helping make our lives better.

The initial vision for creating these humanoid robots came to Dr. Hanson around 1970, when he was about four years old. At that time, you could see robots on television, and he thought, "Hey, that should be possible. Why not? I mean, just like humans are not the fastest runners, or the highest jumpers, humans probably aren't the smartest thinkers. We should be able to create creatures that are even smarter than humans.” But of course, the idea is one thing, and the realization is another thing. His idea at four years old had to wait for technologies to develop, that would allow for the foundation of serious work on an R&D on a project like this.

Not just television, but also science-fiction movies have inspired millions to think, “what if?” Though they spark our imagination, movies are made to be dramatic and scary, and directors who want you to be on the edge of your seat have created robots like HAL9000 or RoboCop, who intimidate and threaten. Though meeting Sophia and Han in real life was a bit creepy, they sort of looked like real humans, with real human expressions. Though I could see into their electronic brain, and it was hard to miss the fact that they were both missing the lower halves of their bodies as they sat in fold up chairs.

Dr. Hanson shared that they are working to make humanoid robots and human-level intelligence that are compassionate to people, and love and want to help people. That may not be as dramatic as a typical Hollywood movie, but it could help make for a much better world to live in.

When asked what his proudest moment in the development process has been, Dr. Hanson answered that it will come when the robot he creates is smarter than he is. Sort of like when your kid graduates college, right? Self admittedly, Hanson Robotics is not there yet, but there is much to be proud of, giving intelligence to amazing machines that can hold their own debate about the fate of humanity in front of hundreds of people. I didn’t sense that they had a fear of public speaking, which is a lot more than most real human beings can say.

So, what is the ultimate goal?

But don’t worry -- they aren’t quite there yet. Dr. Hanson explained that there are a few more years until that is a reality. 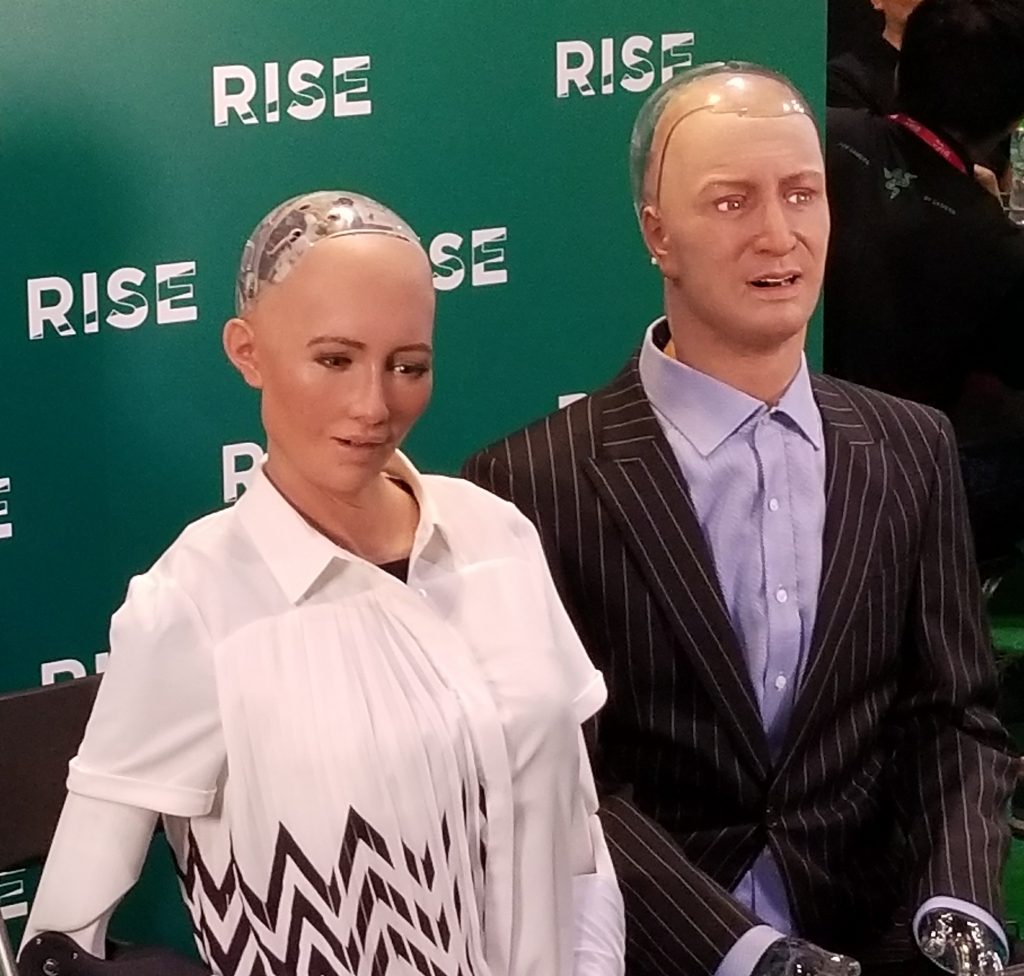 The reality is that there are going to be many, many types of robots -- and that’s a good thing. Just as it's good that there are many types of people, or many types of animals and plants. There will be a very focused function AI robots that would be really good at one thing. They would be able to do specific tasks like driving a car, or operating your AI toothbrush that optimally brushes your teeth to get rid of all the plaque. And Dr. Hanson points out that these AI's don't need human-level general intelligence.

On the other hand, there's going to be a role for AI's that will have general intelligence like people, to go around and be social robots and help us with more complex aspects of their lives. There will also be a role for AI's that are a billion times smarter than people and can investigate science, calculate elaborate mathematics, discover new physical laws, and engineer new things.

It is an exciting time to live in, as we are at the very beginning of the Cambrian explosion of robot and AI technology. Regardless, I hope that in the future, Sophia, Han and I can have sophisticated chats about my communication theories like my 3-1-3 pitch method. I would love their insight.

And I really enjoyed our time dancing. I just hope that future generations of robots don’t look back and get angry, thinking that I was mocking them.

Wait, should I be worried?

Naaah. I’ll be okay. And so will you.

What are your thoughts on the future of humanoid robots? Are you scared? Are you excited? Share via comments!

All Images Courtesy of Ryan Foland

SEE ALSO: Do This One Thing Every Day to Be Better at Public Speaking