Replicating the walking movements demonstrated by humans is really hard when it comes to the realm of robotics. This has left many robots using either wheeled mobility techniques, or using four-legged systems. Researchers at the University of Michigan have been developing a robot named MABEL, which can walk upright on two legs and traverse uneven terrain. The robot learns from past walking experiences and therefore adjusts its movements as it progresses across rocks and hills. The video below demonstrates the tests completed by the robot, and it's important to note that the cable is only there to keep the robot from falling.

The high-tech robot is controlled by an Xbox controller, and the internal algorithms take care of all of MABEL's other movements. Researchers behind the project admit that this robot has its limitations, as quick movements are largely impossible given the current set-up. Through further research, the team believes they will be able to fine-tune the algorithm to allow for more effective movements, according to EECS.

"The main controller handles the forward and backward motion and balance, while a second controller handles side-to-side balance. Da created a library of 15 gaits to handle different walking speeds and ground heights. Each gait is optimized for energy efficiency—making the movement as natural as possible—and respects the constraints of the robot." ~ University of Michigan 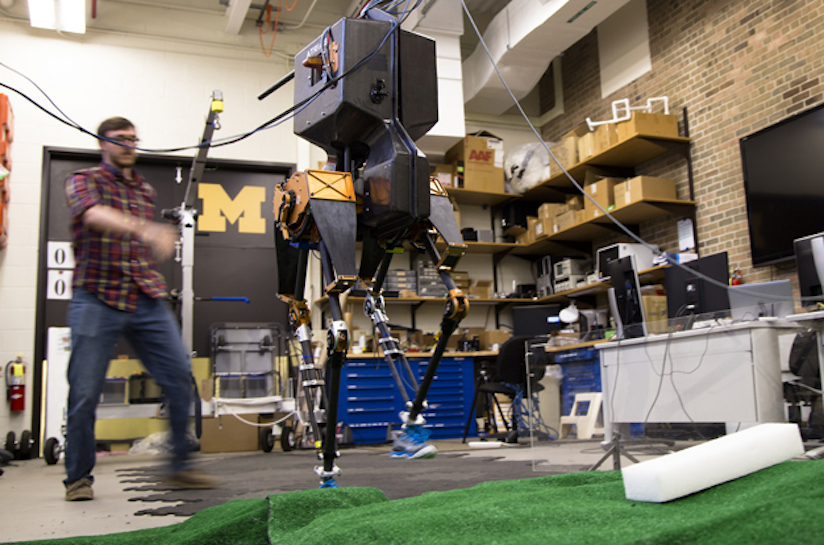 The goal of this research is not to reinvent the robot, but rather develop algorithms that can cross over into robotic prosthetics and further improve amputee's mobility. Boston Dynamics has already created a robot that can walk on two legs but has approached the task largely from the point of view of creating a walking robot. MABEL could prove to be an essential research tool into how humans walk, and the algorithms developed therein could prove invaluable to the world of prosthetic legs.

SEE ALSO: Disney’s New Robot is So Precise it Can Thread a Needle