These Two-Way LEDs Can Harvest Light and Detect Hand Gestures

Combining multiple products into one can save a ton of space. Now researchers are developing new two-way LEDs which can be controlled with touchless gestures and can charge with ambient light.

The new screens can sense light, emit light, and collect energy all in one. The device relies on a newly emerging technology, two-way LEDs. Soon, digital displays will be able to charge and look right back at you at the same time.

The two-way LEDs rely on an older technology: quantum dots. Though they are a variant of them, they function on the same principle, with the added bonus of being able to function in reverse.


Quantum dots have their name because essentially they are just an incredibly small group of atoms concentrated into a point so small they are practically zero-dimensional.

The function of a quantum dot is remarkably simple. It works based on the same principles of a single atom: excite an electron and make it jump up an energy level. When it falls down, it will eject a photon.

An advantage with quantum dots, however, is that the color of emitted light can change based on how big the dot is. Larger dots produce longer wavelengths like reds and infrareds. Smaller quantum dots make shorter wavelengths which produce colors like blue and violet. By arranging multiple sizes of dots onto a screen, it could produce the entire visible color spectrum. However, previous quantum dots could only emit light. Now, scientists developed a new system which can also harvest light and detect hand gestures. 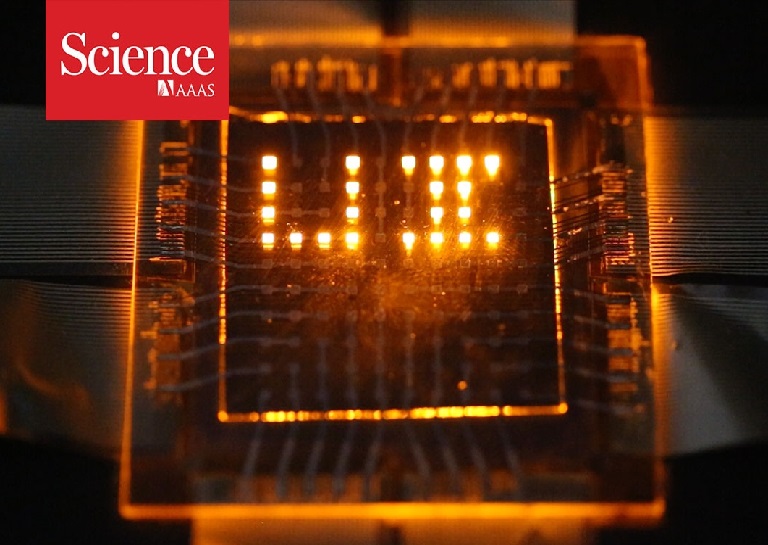 How the Two-Way LEDs work

"The way it responds to light is like a solar cell. So not only can we enhance interaction between users and devices or displays, now we can actually use the displays to harvest light,"

Says Moonsub Shim, professor of materials science and engineering at the U. of I. and the leader of the study.

"So imagine your cellphone just sitting there collecting the ambient light and charging. That's a possibility without having to integrate separate solar cells. We still have a lot of development to do before a display can be completely self-powered, but we think that we can boost the power-harvesting properties without compromising LED performance, so that a significant amount of the display's power is coming from the array itself."

The paper was recently published in the journal Science.

Unlike previous quantum dots, the new LEDs can reverse the process of emitting light with the flip of a switch. Depending on the direction that the voltage flows, the quantum dots can be made to collect or emit light.

Flickering the voltage faster than the eye can detect allows the device to switch between detection and charging mode to display mode without the user ever detecting it.

"These LEDs are the beginning of enabling displays to do something completely different, moving well beyond just displaying information to be much more interactive devices," Says Shim, "That can become the basis for new and interesting designs for a lot of electronics."

The Future of two-way LEDs

The applications of the two-way LEDs fits right in chime with the direction humanity is traveling. Advancing the technology will allow for the screen to see without the need for a camera. While the technology could be used for user interaction applications, much greater uses can be achieved. Primarily, allowing the screen to wirelessly communicate.

Simply detecting variations in light is enough to develop a system which relies on Li-Fi; A system which can transmit data hundreds of times faster than WiFi. Since the entire screen would act as an antenna, more data could be transmitted and received faster than ever before.

2021 Mercedes-Benz E-Class: Fresh New Look and Tech That Can Sense Your Hands

EV BYTON M-Byte Is a Smart Device on Wheels