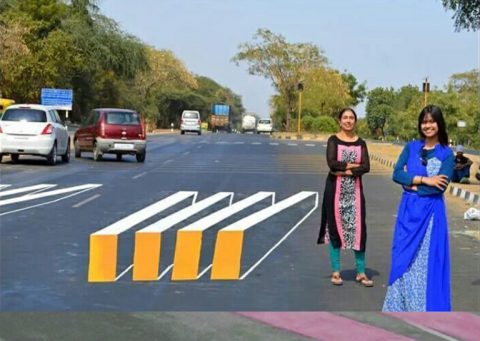 Have you ever stopped to think about the efficacy of the standard white-striped painted crosswalk? Do all crosswalks need to be the same? Who decided to compose them of boring white stripes in 1951, anyway? The classic crosswalk doesn't seem to be preventing car accidents in India, so two artists decided to do something about it. The team is comprised of mother, Saumya Pandya Thakkar and daughter Shakuntala Pandyaand, both of whom are artists.

They painted a sneaky 3D roadblock illusion crosswalk on a highway in the Indian city of Ahmedabadas. The front of the 3D shapes are painted yellow with the depths represented by white dimensional lines. The artwork appears to jut out of the street when far away, but the illusion begins to fade when it is approached. For this reason, the artists say motorists won't be slamming on their brakes as they approach it. The crosswalk's purpose is to create enough of a distraction to make drivers slow down, but not be convincing enough to make them think it's a real object.

There have been some experimental crosswalks done in various cities, but in India, a country where traffic-related deaths are on the rise, experimenting with safer road signage is a good idea. Perhaps as more experimental designs for crosswalks are created, a study can arise to determine the effectiveness of them. There's an additional benefit of creating uniquely designed crosswalks: to alleviate driver boredom. How many times have you been driving along a boring stretch of highway and find your brain losing interest in the world around you? Creating interesting and unusual crosswalks could, in theory, stimulate your mind and create greater alertness and creative thoughts while behind the wheel.

Saumya Pandya Thakkar has been painting other 3D dimensional art in India and the sparrow on a chessboard is just one example of her work. A quick visit to Saumya's Facebook Page reveals some of her cool illusions: 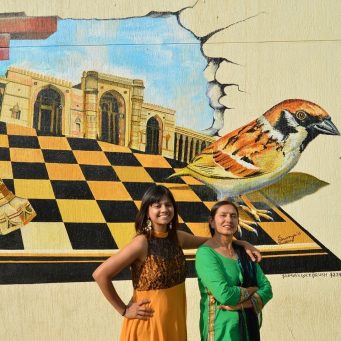 The 3D optical illusion crosswalk as well as the painting pictured above are known as trompe l'oeil, which in French is translated as "deceive the eye".  It's an art technique that uses realistic imagery to create the optical illusion that the depicted objects exist in three dimensions. Artists have been using this depth technique since the Greek and Roman times.

Trompe l'oeil is currently a very popular technique to use in street art and can be seen in cities all over the world. The controversial street artist Miss Me paints in a dimensional style and Banksy has been creating trompe l'oeils for the world's streets for a long time, but neither of these artists ever asked permission to put their art on a crosswalk.