UBTech Robotics unveiled Walker, the first commercialized biped robot in the world, to a captivated audience at this year's CES conference.

China-based UBTech, a company which has already made a name for itself for developing an impressive line of humanoid robots supported with various AI technologies, raised the bar even higher this year at CES with Walker, a bot it deems “the world’s first commercialized biped robot”, promising this year to showcase “the addition of functional arms and a wide range of interactive control features.” 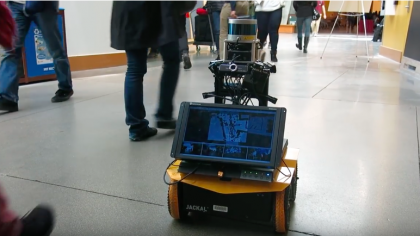 UBTech CEO James Chow shared his lofty vision for the robot: “Walker bridges the gap between technologies that were once only available in scientific research institutions and everyday people. It has been specifically designed to have a tangible and positive impact and provides services that families have never had access to before. As the world’s first biped robot of its kind, Walker exemplifies UBTECH’s commitment to creating technologies that will make a difference and have a positive impact.”

The bot will set you back $299 USD, which based on Walker’s capabilities, seems a fair price. UBTech will continue to focus on research and development (R&D )efforts in the next few months. In addition to Walker, the Lynx with Amazon Alexa, Cruzr, Jimu Robot, and First Order Stormtrooper Robot were also displayed.

Given that First Order Stormtrooper by UBTECH departs in many ways from other competing bots offered by Sphero or Force Friday with its standard humanoid robot design, UBTech made the very wise choice to give their robot the look of a Stormtrooper in order to create some initial appeal (a C-3PO would have been perhaps too on the mark): “We focus on humanoid robotics,” a company spokesperson shared. “That involves limbs and walking. That’s something that we do well. Stormtroopers are universally identifiable. You see more Stormtroopers at Comic-Con than probably any other character.” In achieving the humanoid robot concept of balancing of form and function, it seems UBTech made a good decision to go with a Stormtrooper look.

In another clever move, First Order Stormtrooper by UBTECH went on sale on December 15th, the same day that the latest Star Wars installment hit the big screen.

• A suite of onboard sensors for motion detection: light monitor, an IR detector inside of the feet that prevents it from going over the table edge, and a gyroscope accelerator

• A camera built into the helmet: users can connect via an iPad app to see through First Order Stormtrooper's eyes

• 3 onboard mics with voice command capability

There was something very different about the tone of CES this year, beyond the staggering range of tech-driven product unveilings and inspiring speeches which were delivered. The true star this year was AI and data: many companies seemed to understand and eagerly express a shared vision of their transformative power. Interesting Engineering is proud to have been a part of this vital sharing of ideas, technology, and insights that were a part of the conference.