The Friends of the Earth air kit consists of a single use air monitoring tube, fixings and air pollution guide and instructions. It's one of several such clean air campaigns throughout the United Kingdom.

In UK cities like London, air pollution is a major concern. Londoners know the experience of getting home after a long day and upon blowing their nose, noticing black soot smudged all over the tissue.

Now, citizens are taking monitoring the air around them into their own hands. According to environmental charity Friends of the Earth, 70 groups in the United Kingdom are using their kits as well as developing their own testing kits to determine levels of pollution in multiple areas throughout the country.

The Friends of the Earth air kit consists of; a single use air monitoring tube, fixings and air pollution guide and instructions.

“Most people seem understandably keen to learn about air quality where they live, work, or where their children go to school. But more than 70 local Friends of the Earth groups have used multiple testing kits to uncover a more detailed picture of pollution, often in places lacking much in the way of official monitoring stations,” Oliver Hayes, a Friends of the Earth air pollution campaigner told The Guardian.

The trend has been picked up by multiple clean air campaign projects, including Air Apparent UK, a Bristol based initiative working through Luftdaten, a source for air monitoring kits and sharing data of what users discover through using these kits.

One Bristol-based kit builder named Sam Prince, told The Guardian that relying on government-sourced data isn’t always reliable, “The data from the government is useless as far as I am concerned ... so people are trying to collect more evidence to show the big problem of air quality. What I want to build is a map showing the pollution levels all over Bristol so you could avoid a certain street or area, for example, if you were cycling to work.”

The results collected by these vigilante environmentalists has been shocking. Eastbourne resident Robert Price also told The Guardian’s Sarah Marsh that his efforts had inspired him to start his project called Clean Air Eastbourne.

"I wanted to get my own data to see if the air was bad where I live. I’ve been running it for a month now, and three of the past seven days alone have breached World Health Organisation guidelines. UK/EU limits for particulate air pollution require a year’s worth of data," he said.

Regarding tackling air pollution in other ways, companies are considering different options. French company Sea Bubbles is currently testing an electric water taxi along the Seine as a way to reduce cars on the roads and reduce both noise and pollution levels. 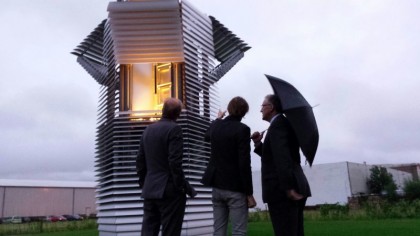 Meanwhile, in London, MBNA Thames Clippers are encouraging tourists and citizens to opt for a waterier form of transport by allowing payment for commuters using Oyster and contactless cards.

Despite these innovations, experts still muse that it might be a longer road to clean air than we think.

“It remains very challenging to scale up river transport and make it sustainable too,” says Fausset. “But I’m an optimist, so I would not rule out people developing more sustainable systems using new kinds of propulsion and new fuel cells in the future.”

Via: Luftdaten, Friends of the Earth, the Guardian