The eco-friendly bus is engineered to have a particle removal efficiency of 99.5 percent. If the technology proves successful it could see the addition of 4,600 more such buses.

Air pollution is increasingly becoming a challenge for countries all over the world. WHO claims that over 4.2 million premature deaths happen across the world due to air pollution.

However, this year, we have witnessed significant steps from countries to mobilize cities and individuals to protect our health and planet from the devastating effects of air pollution. The UK has been a towering figure in the field with their sustainable city models and wind farming techniques.

The country has now put forward a new idea that is simply put, brilliant! An air filtering bus that cleans up the air wherever it goes.

The dream to make Southampton a clean air zone

This innovation comes from the Go-Ahead Group, UK’s largest bus and rail operators. It is named Bluestar Bus and has an air filter system housed on top of it. 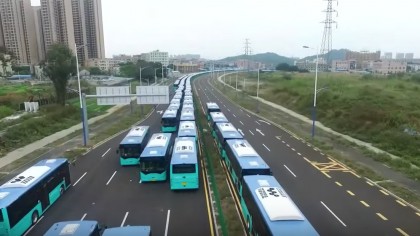 The filter is capable of removing the fine particles in the air with an efficiency of up to 99.5 percent, effectively cleaning up the air and releasing pure air as it goes through the filters.

Bluestar is going to start its operation in Southampton first as the city has reportedly reached its limit for unsafe air pollution. The bus will be put on a three-month trial where it will serve normal duty.

The air filter will then be weighed after three months to see how much particles it has cleaned.

“We are going a step further in the potential for our buses to actively clean the environment. It’s a huge development in our environmental leadership, and we are also proud to be pioneering the prototype in the UK.” said David Brown, Go-Ahead chief executive.

A lot is riding on the success of Bluestar

If the Bluestar return viable results, then Go-Ahead Group is planning on rolling out the same tech to 4,600 buses. In their efforts to convert Southampton into a clear air zone by 2020, this decision will undoubtedly come to their aid.

The city also has plans to introduce pollution charges that could see fines of up to £100 for old gas-guzzlers like buses, HGVs, and taxis.

“We want this pilot to show that buses should be looked at as not just the solution to congestion in cities, but also as a solution to the air quality problem. As the bus removes the ultrafine particles from the air as it travels along the route, it is helping solve the air quality problems of the city. This bus will clean the air on its route 1.7 times a year to a height of 10 meters – imagine the change we could make to air quality if all buses had this technology.” David added.

He mentioned that in a year, a single bus could clean the air by a volume equivalent to 25 Olympic-sized swimming pools. The company also wanted to demonstrate that buses could be used to reduced congestion and pollution, a great feat indeed!

The filter system used in this eco-friendly bus is built by Pall Aerospace. The company touted that they have employed aerospace design characteristics to make the system highly efficient, both in form and function.

However, the verdict is still not out yet as the Bluestar needs to finish its training first.

11 of the Wackiest Vehicle and Transportation Ideas Ever Devised