Imperial College London revealed in its 7th Electric Insights report that, in the first quarter of 2018, wind power produced more energy in the UK than nuclear.

This Tuesday, Imperial College London announced that, for the first time ever, wind power had produced more electricity in Britain than nuclear for the period of January to March 2018. The news was revealed in the institution's 7th Electric Insights report.

The reports are produced each quarter by Dr. Iain Staffell of the Centre for Environmental Policy along with other experts. This latest Electric Insights analysis found that 18.8% of the UK’s wind power over the first quarter of 2018 had come from wind farms.

The analysis also revealed that, while at their peak, wind farms supplied 47.3% of the country’s demand. All in all, wind peaked at over 14 GW of electricity and, in the end, produced more power than nuclear. 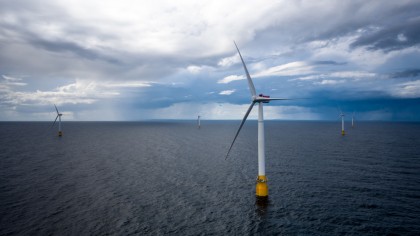 Although this is promising news, wind energy is still a long way from being the UK’s dominant power source. Gas provided the largest amount of the country’s electricity at 39.4% while nuclear produced 18.76%.

Impressively enough, the report did find that at least on the night of March 17 wind accounted for 47% of the country's power, revealing a second new record. “It is reassuring to see renewables providing more of the country’s power particularly over the winter,” said Staffell in a statement.

“This was also happening while Britain’s energy system was being tested by the ‘Beast from the East’ so renewables are continuing to prove themselves as a dependable part of our electricity mix,” added Staffell. The Beast from the East was a long and aggressive cold period that saw wind provide between 12% and 13% of Britain’s electricity.

Part of Britain’s new wind supply is also the result of the new 2.2GW cable connecting Scotland to North Wales. Scotland has an impressive wind capacity of 7.7GW.

In addition, nuclear had some setbacks in the first three months of 2018. Two reactors were temporarily shut down for maintenance issues and another due to seaweed clogs, a regular complication in nuclear plants.

"For me, the report shows just how complex our interconnected energy system is,” says Staffell. “There are critical questions about resilience and security of supply.”

The report also found that wind was the second largest source of electricity after gas. This new wind power generation was key to carbon emissions being 7% lower than the same period in 2017.

However, wind farms had support from other renewable energy sources which altogether saw 26% of the UK’s generation mix come from clean energy. Meanwhile, low carbon sources made up 49% of the mix while coal and gas sources were both down due to the increase in renewables.

The report did have some bad news. Electricity prices were one-sixth higher than the same period last year.