The novel ceramic aerogel is so light it can rest on a flower but so durable it can have applications in space.

Researchers at UCLA in collaboration with eight other research institutions have created a novel ceramic aerogel that is so light it can rest on a flower but so durable it can have applications in space. The material can withstand the extreme temperatures and temperature spikes often witnessed in space missions.

SEE ALSO: AEROGEL CAN NOW BE FORMED FROM WASTE PAPER

"The key to the durability of our new ceramic aerogel is its unique architecture," said study lead Xiangfeng Duan, a UCLA professor of chemistry and biochemistry. "Its innate flexibility helps it take the pounding from extreme heat and temperature shocks that would cause other ceramic aerogels to fail."

The new ceramic aerogel features a very unique atomic composition and microscopic structure that make it very elastic. When heated, the material contracts perpendicularly to the direction that it's compressed making it more flexible than other current ceramic aerogels.

The novel aerogel can be compressed to 5 percent of its original volume and then recover as opposed to the 20 percent achievable by its current counterparts. Most current ceramic aerogels are highly brittle and tend to fracture after repeated exposure to extreme temperature swings. 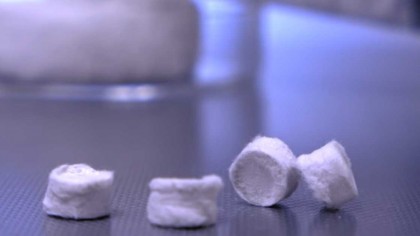 The new ceramic aerogel does not have those limitations. In tests, it stood up to hundreds of exposures to sudden and extreme temperature changes ranging from minus 198 degrees Celsius to 900 degrees above zero in just a few seconds.

It can also withstand long term exposure to extreme temperatures. After being exposed for one whole week to 1,400 degrees Celsius, it lost less than 1 percent of its mechanical strength.

The reason for this durability is that the material contracts when heated while its current counterparts expand under the same conditions.

The researchers also developed the aerogel with what they call interior "walls." These walls consist of a reinforcement created with a double-pane structure. The adjustment decreases the material's weight while increasing its insulating abilities. And since the material is already 99 percent air by volume, it is obviously very lightweight

Adapted for use in other material

Duan believes the process for his novel aerogel could be replicated and adapted for use in other ultra-lightweight materials.

The study was published in Science.