A new flexible device converts electromagnetic waves, used by Wi-Fi, into voltage that can power electronics.

This week, a new paper published in the journal Nature by an international team, led by researchers at MIT, reveals a new device that can convert wifi signals into electricity, opening the door for the wireless powering of electronics and the over-the-air charging of batteries.

It does this by using a flexible radio-frequency (RF) antenna attached to a new kind of semiconductor a few atoms in thickness. The semiconductor receives the AC input and outputs voltage in DC, which is capable of powering electronics or recharging batteries.

The idea of using wireless transmission to power devices is an old one, going all the way back to Nikola Tesla, but modern attempts to build effective rectennas have run into difficulty. The critical component of the rectenna, known as rectifiers, have previously relied on materials that were very rigid, like silicon, and did not effectively scale. More flexible options featured rectifiers that were too weak to pick up the higher-frequency electromagnetic transmissions that would make them functional.

The researchers behind the study feel they have found the right solution to both these problems.

In order to overcome these challenges, the researchers used a material called molybdenum disulfide (MoS2). When exposed to certain chemical agents, MoS2 reconfigured its atoms in a manner that operates as a switch by forcing a phase transition between a semiconducting to a metallic substance. It creates what is known as a Schottky diode, a junction between a semiconductor and a metallic substance. 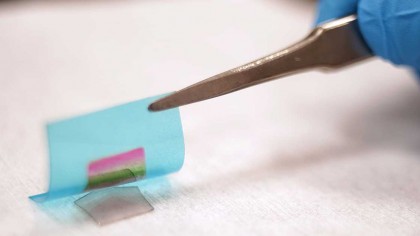 Parasitic capacitance is the natural storage of portions of the passing electrical charge in certain materials that make up the rectifier. This has the effect of slowing down the circuit and decreasing its efficiency.

It’s this improved efficiency on the researcher’s Schottky diode—by orders of magnitude—that makes their device so powerful since its much lower parasitic capacitance over the current, top-of-the-line flexible rectifiers allows it to capture much higher frequency signals, converting up to 10 GHz of wireless signals into electricity.

“Such a design,” according to Zhang, “has allowed a fully flexible device that is fast enough to cover most of the radio-frequency bands used by our daily electronics, including Wi-Fi, Bluetooth, cellular LTE, and many others.”

Turning Wi-Fi into Electricity in the Real World

The real world applications for a flexible device like this are mind-boggling. Besides flexible, wearable electronics that don’t need independent power sources, like batteries, ingestible medical sensors could benefit greatly from this technology as they pass through the patient's system, transmitting data as it goes.

“Ideally you don’t want to use batteries to power these systems, because if they leak lithium, the patient could die,” according to Jesús Grajal, co-author of the study and a researcher at the Technical University of Madrid. “It is much better to harvest energy from the environment to power up these small labs inside the body and communicate data to external computers.”

Tomás Palacios, a co-author of the study and professor in the Department of Electrical Engineering and Computer Science and director of the MIT/MTL Center for Graphene Devices and 2D Systems in the school’s Microsystems Technology Laboratories, has an even bigger plan for this technology.

“What if we could develop electronic systems that we wrap around a bridge or cover an entire highway, or the walls of our office and bring electronic intelligence to everything around us? How do you provide energy for those electronics?

“We have come up with a new way to power the electronics systems of the future — by harvesting Wi-Fi energy in a way that’s easily integrated in large areas — to bring intelligence to every object around us.”

Resourceful Guy Turns His Vacuum Into an R2-D2 Robot

YouTuber Turns a 1920s Typewriter Into a MIDI Drum Machine