Infrared cameras remain some of the best tools for spotting targets at night or through thick fog or visual obstructions. It's a go-to tactic used in both pop culture shows and real-life scenarios. However, a new creation from a team with the University of Wisconsin-Madison could make it a lot harder for those heat-emitting creations to be detected on an infrared radar.

“What we have shown is an ultrathin stealth ‘sheet.’ Right now, what people have is much heavier metal armor or thermal blankets,” said researcher Hongrui Jiang. Jiang serves as a professor of electrical and computer engineering at the University of Wisconsin–Madison.

Humans, animals, and vehicles emit heat when they move or (in the case of living creatures) exist. That heat comes off as infrared light. The new stealth sheet offers more than what current heat-masking technologies provide in terms of safety and security, the team said.

“It’s a matter of the weight, the cost and ease of use,” said Jiang.

The research was recently published in an edition of the journal Advanced Engineering Materials. The sheet itself is just one millimeter thick, but thickness doesn't mean correlate to the material's effectiveness. The sheet absorbs roughly 94 percent of the infrared light it encounters, according to the report. That's enough of a reduction to render whatever is beneath the cloaking material completely invisible to even the best infrared detection systems. 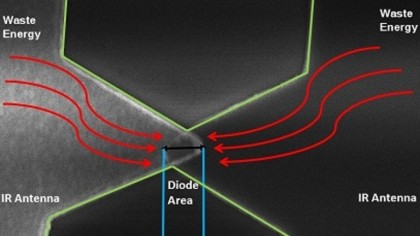 The 'stealth sheet' goes one step further. It also absorbs light in the mid-wavelength and long-wavelength infrared range. That light is often emitted by most humans and other creatures that exist at a similar body temperature.

“You can intentionally deceive an infrared detector by presenting a false heat signature,” said Jiang. “It could conceal a tank by presenting what looks like a simple highway guardrail.”

In order to succeed, the team needed a material capable of consistently and effectively trapping infrared light. Jiang and his team used black silicon -- a material often used in solar cells. Black silicon absorbs light through the existence of millions of microscopic needles or nanowires. Those nanowires are densely packed on the surface and face upwards. The incoming light reflects back and forth on the vertical wires, and that traps the material bouncing around within those wires rather than escaping out.

Jiang and his team assert they're the first ones to apply black silicon to trapping infrared. The team also improved the absorption of the silicon by adjusting how they created the material.

“We didn’t completely reinvent the whole process, but we did extend the process to much taller nanowires,” said Jiang, who developed the material in National Science Foundation-supported facilities at UW–Madison.

Jiang and his team are currently trying to upscale the prototype and figure out real-world applications. The University of Wisconsin Madison is helping the team figure out a way to patent the system and also partner it with a program through the university's Discovery to Product program.