Understand the Physics Behind These Incredible Ice Discs

Nature has a thing for patterns and naturally occurring shapes, especially circles. However, certain UFO shaped discs have stumped hundreds. These ice discs sit atop rivers and seemingly rotate with a mind of their own. Most recently, Michigan resident Jason Robinson caught the event on camera, and the footage can be found on YouTube.

So what causes this phenomenon anyway? The perfectly cut circles appear as if someone traced them out. However, the properties of melting ice lead to the rotation in most cases, rather than the body of water's motion.

A team of researchers from the University of Liege in Belgium made their own version of the spinning ice. They found that as the water got warmer, the ice disc moved faster in its rotation. They also reported the following:

"We investigated the flow under the bottom face of the ice disks by a particle image velocimetry technique. We find that the flow goes downwards and also rotates horizontally, so that a vertical vortex is generated under the ice disk."

Water remains one of Nature's most fascinating substances. The density of water is highest at 4 degrees Celsius (roughly 39 degrees Fahrenheit). When the disc melts, it begins to cool the surrounding water. When that water reaches 4 degrees Celsius, it sinks and creates a vortex which spins the remaining ice on top of the water. Granted, the vortex created isn't the rapidly swirling one we often think of that sucks items into its depths. As you can see from the videos, it's just enough to spin the ice like a record on a turntable. 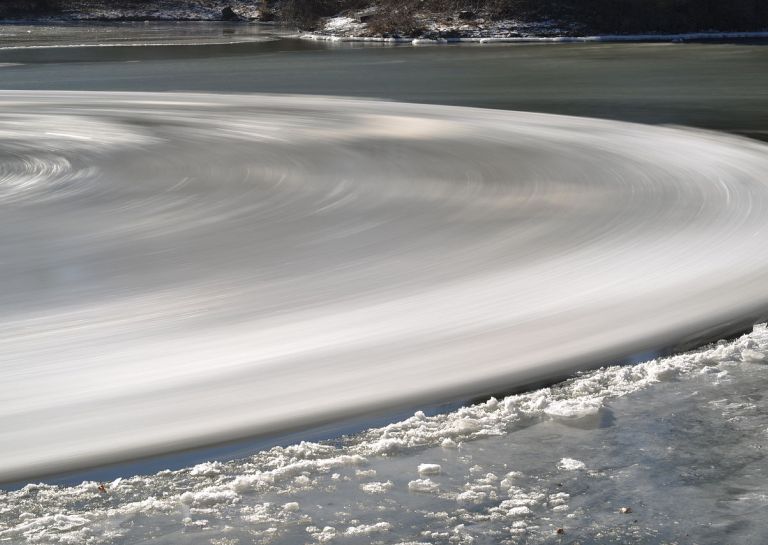 This isn't the first time an event like this was caught on camera. In 2013, the Associated Press captured an even larger spinning disc in North Dakota. Retired engineer George Loegering discovered the ice patch in the Sheyenne River, and the AP noted it resulted from dense air and an eddy.

One mystery remains, however. Why is the ice so perfectly circular? Some physicists think smaller bits of ice get caught in the vortex and then create a growing disc. Others say the ice separates at its weakest and thinnest points into a shape which then gets rounded by the spinning and melting.