The early morning launch from Cape Canaveral, Florida successfully marked the 50th mission ULA completed for the US Air Force.

The early hours of Wednesday morning marked another successful launch for United Launch Alliance. The aerospace giant sent up its Atlas V AEHF-4 with smooth sailing and no hiccups, making the two-hour launch window seem unnecessary given the near-perfect conditions of the launch.

ULA streamed the entire event live, and anyone who missed the event can watch the launch below:

The Atlas V 551 rocket sent up a communications satellite from the Advanced Extremely High Frequency (AEHF) line. The AEHF satellite was created by the US Air Force to provide more secure communications between US military leadership and ground forces deployed around the world. The satellite is worth an estimated $1.8 billion.

"It's an important asset for the warfighter and will be employed for years to come," Lt. Gen. John Thompson of the USAF Space and Missiles Systems Center in Los Angeles said of AEHF-4 in a statement.

ULA’s #AtlasV rocket launched at 12:15 a.m. EDT carrying the #AEHF4 satellite. Who else stayed up to watch this spectacular launch?

The launch took place at 12:15 a.m. EST in Cape Canaveral, Florida from Launchpad 41, briefly lighting up the night sky in central Florida.

The clear skies meant thousands of Floridians could simply step outside their door and easily see the launch.

I watched it from here in Naples Florida. With a perfectly clear sky I could see it all the way through ferring separation. #AtlasV

About the Atlas V rocket

Atlas V rockets are some of the most reliable rockets in aerospace to date. They've been used to launch three other AEHF satellites with success in 2010, 2012, and 2013.

Today's launch marks the 79th launch for an Atlas V rocket. It's the ninth launch for the 551 configuration of the rocket. 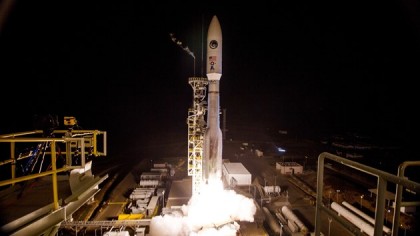 The Atlas V contained an upper stage called the Centaur, which held some 12,300 gallons of the cryogenic propellant for three separate engine burns during tonight's launch.

Tonight's launch delivered the AEHF-4 after a three-and-a-half hour ascent, powered by three burns of the Centaur upper stage.

"AEHF-4 will be delivered into an optimized high-perigee, low-inclination geosynchronous transfer orbit..." ULA officials explained. "This orbit benefits the satellite by requiring less fuel to reach its final geosynchronous altitude."