In an impressive display of force, the United States Air Force just launched Twenty-four F-22s all at once from an airbase in Alaska. The fighters lined up information before taking off one by one.

SEE ALSO: 12+ OF THE BIGGEST AIRCRAFT CARRIERS IN THE WORLD

The formation and take off is known as an ‘elephant walk’ It is a way of testing the capabilities of the base as well as showing the world just how powerful the US Air Force is.

The airbase provides a spectacular starting point for the exercise, the planes take off with a backdrop of craggy snow-dusted mountains.

It isn’t the first time power displays have been made from the Alaskan base, the airbase has done similar routines with 30 A-10 Warthogs, a group of Japan-based F-15s, a bunch of A-10s and F-16s, and the F-35 Joint Strike Fighter.

The procedure shows US is ready for Indo-Pacific response

In addition to the F-22s an E-3 Sentry airborne warning and control aircraft (AWACs) and a C-17 Globemaster III heavy-lift transport joined the walk.

The fighters were part of the JBER-based active duty 3rd Wing and reservists from the 477th Fighter Group. The display was part of the semiannual exercise design called Polar Force’ to test the bases readiness to respond to a crisis in the Indo-Pacific region.

However, looking at today’s display that seems unlikely. The F-22 is considered to be the most advanced fighter plane in existence. But last year it was involved in an unusual and controversial mission. An F-22 dropped a bomb on a drug lab in Afghanistan. 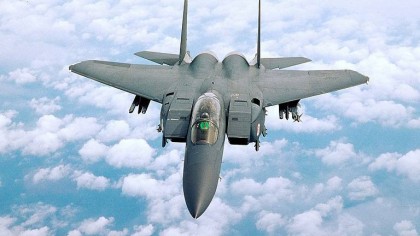 While the Raptor airstrike was unarguably successful, many insiders in the defense industry are beginning to ask whether a mission of this kind was warranted, or represented the best and most appropriate use of the plane’s resources.

The costs involved with employing the Raptor in an operation of this magnitude hover at around a staggering $70,000 per hour. Others are also calling into question the decision to carry out the action against an unprotected drug factory.

The mission took places as part of Operation Jagged Edge, which aims to break up the Taliban’s drug production network. Heroin produced by the Taliban funds the group's operations. Afghanistan General John Nicholson estimates that there are as many as 400 to 500 drug production sites operating at any given time in the country.