There are a network of unused London Underground lines and tunnels and one project proposal from architecture firm Gensler to convert them into pedestrian and bike paths that also harvest kinetic energy from people's steps has just won the London Planning Award for 'Best Conceptual Project'. 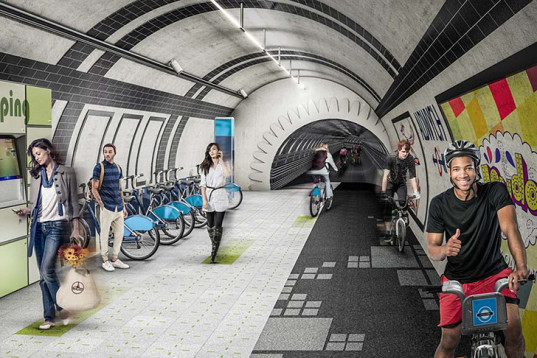 The London Underline project looks to convert the disused Piccadilly Line branch from Holborn to the abandoned Aldwych station along with a lengthy stretch from Green Park to Charing Cross to create subterranean commute routes for pedestrians and cyclists. Rental bikes will be on offer for those in need and the lines will be lined with stores and cafes.

Gensler explains “With current pressures on London to cope with future transport capacity for pedestrians, cyclists and tube users, London is in desperate need for new types of public and community space, as well as affordable retail, commerce and entertainment spaces. Subterranean spaces present an excellent option for new uses.” 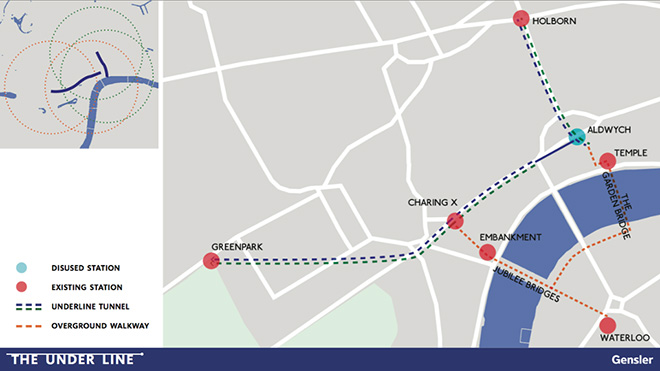 London is at an all time peak of population and this is adding a lot of stress to public transport and commuting options. Cycling around London can be rather dangerous and the tunnel system would also provide protection the weather element, because we all know how good the weather is in Britain.

The company also mentioned installing tech savvy paving slabs that can harvest the energy of pedestrian's steps and convert it to electricity. They also claim that this would let the project operate with a zero carbon footprint and be completely self sufficient in terms of energy usage, although I'll believe that when I see it.

Gensler co-director Ian Mulcahey did discuss more realistic ideas and use of the energy with the Guardian: “Could you turn that [kinetic] power into art pieces or advertising opportunities? Could you tie it all together, perhaps with sponsorship and naming rights, so that it’s a self-funding exercise?”

All in all it's a pretty good idea and how could you not be supportive of it when the lines are just laying there unused. I for one would definitely be tempted to cycle to work if it meant a guarantee of avoiding traffic and bad weather.

As Mulcahey told the Evening Standard: “Now that London has reached the highest level of population in its history we need to think creatively about how to maximize the potential of our infrastructure… The adaptation of surplus and underutilized tube and rail tunnels could provide a quick and simple addition to our infrastructure network.”