There are some interesting things happening in Latin America these days regarding clean energy. For example, Uruguay is now spending 15 percent of its gross domestic product on renewables, representing 94.5 percent of its electricity generation and an investment of $7 billion over the past five years. Wind, solar and biomass, together with hydropower, represent 55 percent of the overall energy mix.

This is a remarkable achievement, providing an effective case study showing the rest of the world how it can do the same thing. Currently, the contribution of renewable energy to the global energy mix is just 12 percent, with a figure of 20 percent in Europe.

Uruguay is also making an outstanding commitment to fighting climate change. At the recent United Nations climate change summit in Paris, Uruguay’s head of climate change policy, Ramón Méndez, pledged to cut the country’s carbon emissions by 88 percent by 2017. It has made a good start already, slashing its carbon footprint without assistance from subsidies or inflicting higher costs on consumers and successfully ending its reliance on oil in the space of just 15 years. It is hoping to become totally carbon neutral by 2030.

Previously, oil represented 27 percent of Uruguay’s imports and the country was about to build a new pipeline to bring gas in from neighboring Argentina. The largest share of imports into the country is now taken by wind turbines, which tend to clog up the ports as they are waiting to be installed. 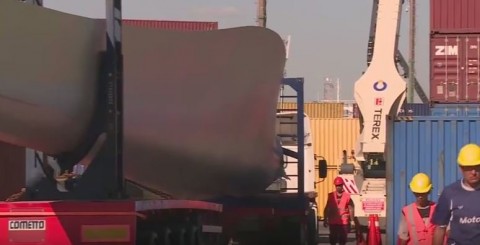 The transition to renewables began between 2005 and 2010, during the current President Tabaré Vázquez’s first term of office. Hydropower already maintained a strong presence in the country, although no new hydropower plants have been added for decades. That is probably just as well, given that hydropower is tremendously vulnerable to the effects of climate change. The four old hydroelectric dams depend on ancient oil-powered thermal plants for back up when the hydropower suddenly drops due to drought. Three of the dams were built on the Negro River between the 1930's and the 1970's with the fourth, on the Uruguay River and shared with Argentina, built in the 1970's.

The greatest progress since then, with regard to clean energy, has been made in the areas of wind power and biomass. One of the main benefits of such a high level of renewable energy deployment is fewer power cuts, because the country’s diverse energy mix is more resistant to droughts.

Travellers along the Route 5 highway from Montevideo to Rivera, can see the difference. Within a distance of 200 miles there are three agro-industrial plants running on biomass and three wind farms, the largest of which is the 115 MW Peralta wind farm constructed by German company Enercon, which also operates and maintains it. Wind speed is about 8 mph and the energy generated by the wind farm is sold at price which will remain fixed for 20 years and is guaranteed by the state utility.

This in turn has attracted more wind power companies, which are queuing up to invest in the country. The impact on bidding means that electricity generation costs have plummeted, having fallen by 30 percent over the past three years. Enercon itself intends to expand its operations in the country while another German company, Nordex, is constructing an even larger wind farm further north. Uruguay is now aiming for 1 GW of installed wind capacity and is not that far from achieving it. 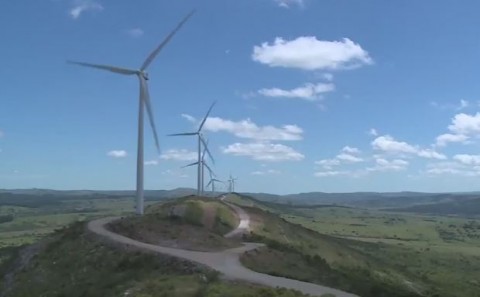 Solar power in Uruguay currently consists of one operating 50-watt plant consisting of 100 hectares of solar panels and numerous smaller plants of 1-5 MW which are mainly distributed across the north of the country. A second 50 MW plant is planned, with investment from Europe, according to physicist Gonzalo Abal from the Solar Energy Laboratory of the University of the Republic of Uruguay, speaking to IPS.

There isn’t any nuclear power at all. However, the country does have interconnections with Brazil and Argentina. The former has been delayed by frequency differences between the two countries power grids.

“What we’ve learned is that renewables is just a financial business” said Ramon Méndez. “The construction and maintenance costs are low, so as long as you give investors a secure environment, it is a very attractive.”

According to Mendez, the main factors in Uruguay’s clean energy success has been clear decision making and a favorable regulatory environment, alongside a close relationship between the public and private sectors. A legal framework was established, including authorization for clients connected to the low voltage grid to generate electric power from renewable sources, including wind, solar and biomass with a potential of no more than 150 kilowatts. There were several political initiatives, such as the 2005-2030 Energy Policy, or the 2015-2024 National Energy Efficiency Plan, which was adopted on August 3rd this year. The Energy Efficiency Plan is aiming to reduce energy consumption across industry and the economy, particularly with regard to residential areas and transportation. These two areas will represent 75 percent of total energy reduction by 2024.

Financing the transition has been supported by tax breaks established by the Investment Promotion Law. It requires at least five percent of any investment to be spent on renewable energy.

Uruguay has now been named by WWF as one of its “Green Energy Leaders” and it has also earned praise from the World Bank and the Economic commission for Latin America and the Caribbean. Whether or not the rest of the world can follow Uruguay’s example or not remains to be seen, but it’s surely something to aim for.