The era of laser weaponry is upon us. The U.S. Army in partnership with Raytheon recently unveiled an AH-64 Apache attack helicopter modified with a high-energy laser weapon. The Apache helicopter has a fully integrated laser system successfully used to shoot several targets. 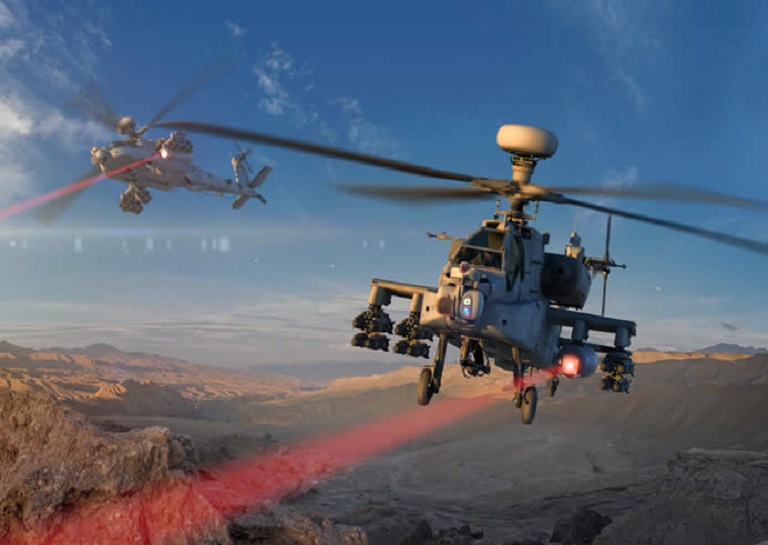 Raytheon recently released a video of the weapon's system in use as it engaged and fired at several targets at the White Sands Missile Range. The company claims the test “marks the first time that a fully integrated laser system successfully engaged and fired on a target from a rotary-wing aircraft over a wide variety of flight regimes, altitudes and air speeds."

A team comprised of military specialists and Raytheon engineers integrated the Multi-Spectral Targeting System — an advanced electro-optical infrared sensor — with a laser.

The MTS tracks the targets and provides the laser with situational awareness. Then, the laser adjusts its aim to compensate for the motion of the helicopter and adjust the laser.

"Our goal is to pull the future forward," says Art Morrish, vice president of Advanced Concepts and Technologies for Raytheon Space and Airborne Systems. "This data collection shows we're on the right track."

Currently, little information has been released about the power of the system. Unfortunately, the video does not provide much insight either.

Helicopters are renowned for their extreme vibrations as they cut through the air. It is likely that the vibrations prevent the laser from holding a precise aim on a target, reducing its effectiveness.

For it to be effective, the laser weapon system must hold a steady aim as the laser heats up the target.

Though it functions well on stationary systems, perhaps the laser is not yet powerful enough to be an effective weapon on board helicopters.

Of course, increasing the power is an option to reduce the amount of time required for the laser to incinerate a target. However, it comes with its own set of problems - power.

The laser is likely powered by a large battery bank or capacitor system. It draws its power from the turbine system in the helicopter, slightly reducing the power output to the rotor system. If the laser draws too much power, it might take too long for it to charge. Furthermore, drawing too much power may reduce the helicopter's power to the point where performance is affected.

The system is similar to the LaWS (Laser Weapon System) unveiled on the destroyer USS Dewey.

The technology uses a high-power laser to eliminate threats like small vessels or aerial vehicles without the need for bullets.

The LaW System uses an infrared beam generated by a solid-state laser array that can quickly melt through thin steel and other material. At full power, the laser can take out drones in as little as two seconds.

The laser can also target sensors and detonate explosives from a distance away.

Tests in 2014 revealed the laser system is a feasible means of defense on Naval ships. Without the necessity for the development of explosive devices and manpower to fire other weapons, the laser system is significantly more cost effective to operate.

As for the laser system attached to the Apache helicopter, it is still yet to be confirmed if the system is viable as a defense mechanism.