"King" coal will once again be outperformed by natural gas, according to a new report from the Energy Information Agency.

Natural gas is set to overtake its coal counterparts within the next two years, barring any intervention from the US government, according to new research from US officials.

Gas could fulfill to 37 percent of the overall electricity demand during the summer, and those numbers aren't likely to change. Coal, by comparison, is only expected to contribute 30 percent of that energy.

The recent report comes from the Energy Information Administration (EIA). The EIA is an independent federal agency that has access to and synthesize energy data from other government organizations.

This summer alone could provide the fiercest competition between the two energy types in terms of contribution to the US energy market. In the United States, the summer months mark the highest demands for electricity -- and they're often the months analyzed to tell which energy type will win out. (It's important to note that in winter months, natural gas also serves as a primary leader in heating homes.)

The switch from coal to natural gas could be thanks to the continually cheaper natural gas prices. The EIA noted that between 2015 to 2017, natural gas costs fell to half of what they'd been in the previous decade.

The EIA report didn't stop at the fight between coal and natural gas. It also mentioned statistics about oil production and usage. The organization estimated gasoline prices would average $2.76 per gallon for the rest of 2018, and go up a cent on average the following year. This could force more Americans to reconsider just how fuel efficient their cars really are, especially for those millions looking for new vehicles each year.

And what of natural gas and coal's clean energy alternatives? Recent reports have also noted that those alternatives are catching up to natural gas -- the power source many have called a bridge from coal to more sustainable energy sources.

While natural gas is cheaper than coal, the costs associated with greener power are also dropping. There's also the fact that the United States especially might be grossly underestimating just how much emissions they're emitting into the atmosphere. 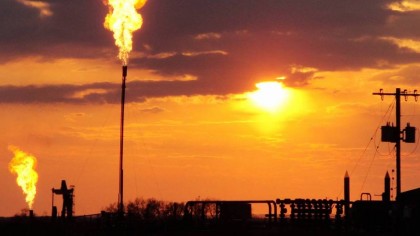 These alternative fuel sources will vary in price depending on a person's location. For example, the Midwest of the US has very low wind energy systems. In the South and Southwest, it's often solar. The batteries used to bring these systems to life are also becoming more available.

“While current battery storage chemistries may not be able to do all of the same work as gas,” Kelly Speakes-Backman, CEO of the Energy Storage Association (ESA) said in an interview with Vox, “the portfolio of storage technologies may be able to address the majority of the same functions, especially as longer-duration chemistries emerge.”