The Pentagon’s Non-Lethal Weapons Program is working on developing a laser which can create startling sounds to terrify the enemy. The laser weapon will use balls of plasma to alter atoms in the air.

The US military is working on an experimental laser technology that could create the sound of voices out of thin air by altering atoms. The US military’s Joint Non-Lethal Weapons Program, or JNLWD, thinks it can achieve this goal in the next few years.

This interesting weapon comprises of two parts, a femtosecond laser that shoots a burst of light for 10−15 seconds. It thus creates a ball of plasma. Scientists then hit that plasma with a nanolaser which is tuned to a very narrow range of wavelengths. They use this to be able to manipulate the plasma field in such a way that it can produce light and noise.

If you get the interaction precise enough, you can get something that sounds like a very muffled walkie-talkie. The research is still in the early stages but the lab is coming closer to achieving human-like sounds.

“We’re this close to getting it to speak to us. I need three or four more kilohertz,” David Law, who runs JNLWD’s technology division, said. Law eventually wants a single system which can produce multiple effects such as noise, light, even heat. It is thought that these can replace a wide variety of non-lethal weapons that the military has been testing.

The non-lethal weapon could intimidate the enemy

The technology could have some interesting potential applications but the Pentagon thinks it could be useful to stop people from charging checkpoints. It could also intimidate enemy groups into thinking there are more opposition soldiers than actually are. 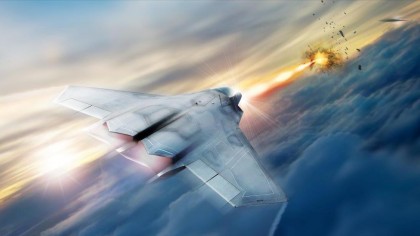 The voice laser does not at the moment project sound from a speaker but can beam it directly towards an enemy, which makes the voices appear from thin air. This will have the implication that the soldiers between the weapon and the target will not be affected.

“Range is a function of the optics. The bigger the mirrors, the farther the range,” Law said. "A five-inch mirror creates the effect about one kilometer away; an 8-inch mirror, about five kilometers. They’ve created plasmas at 20 or 30 kilometers. This is the first non-lethal weapon that could go out tens of kilometers.” he added.

In physics, there is the Kerr effect. This is a term which refers to minute changes in the refractive index as a result of electromagnetic field changes. This will make it easier to create the effect from a distance.

“One of the things about the ultra short pulse, it wants to form at longer ranges. It’s harder to form at shorter ranges,” said Law.

Military powers in the world have been investing heavily in laser technology in the last few years. It was revealed last month the US was close to disclosing new super-powered lasers which would be capable of blasting drones out of the sky.

These 150-kilowatt weapons will be fitted to warships. They are designed to take out drones, aircraft, cruise missiles and even other ships. Earlier this month, Russia published reports that the country’s new plane-mounted lasers would be capable of taking out enemy satellites.