The US Navy had two big wins last week, first The USS Gerald R. Ford completed its maiden successful launch and recovery of a fighter jet. Secondly, the launch tested the new Electromagnetic Aircraft Launch System or EMALS for the first time.

On July 28, an F/A-18F Super Hornet was launched from the flight deck using the new system and then made the first successful landing on the recently commissioned ship using  Advanced Arresting Gear (AAG) system.

EMALS uses similar engineering to a railgun to launch fighter jets from the deck of a ship. Traditionally fighter jets were launched using catapults to fling them off the short runways of the ships. These mechanical catapults were powered by steam diverted from the ship’s nuclear reactor. Essentially a head of live steam blasted a piston down a groove in the flight deck that dragged the aircraft along the deck, thrusting it into the air.

This is a solid method and has been in operation since World War II. Unfortunately, the system requires large amounts of maintenance and the power output is difficult to adjust. The power of the catapult is perfect for fighter jets, but as smaller drones are now also being launched off ships, the ability to power down the steam is an essential requirement.

The new method for launching, Electromagnetic Aircraft Launch System, takes its power directly from the ship’s generator. The diverted energy powers electromagnets that accelerate the fighter down the runway in the same way a slug is propelled in a railgun.

The road to the successful Electromagnetic Aircraft Launch System launch this week was not without its problems. In a previous public test, the system failed, only managing to successfully propel a launch after the media had left. President Donald Trump has also been a critic of the technology saying, “Digital. They have digital. What is digital? And it's very complicated, you have to be Albert Einstein to figure it out. ...You're going to goddamned steam, the digital costs hundreds of millions of dollars more money and it's no good." 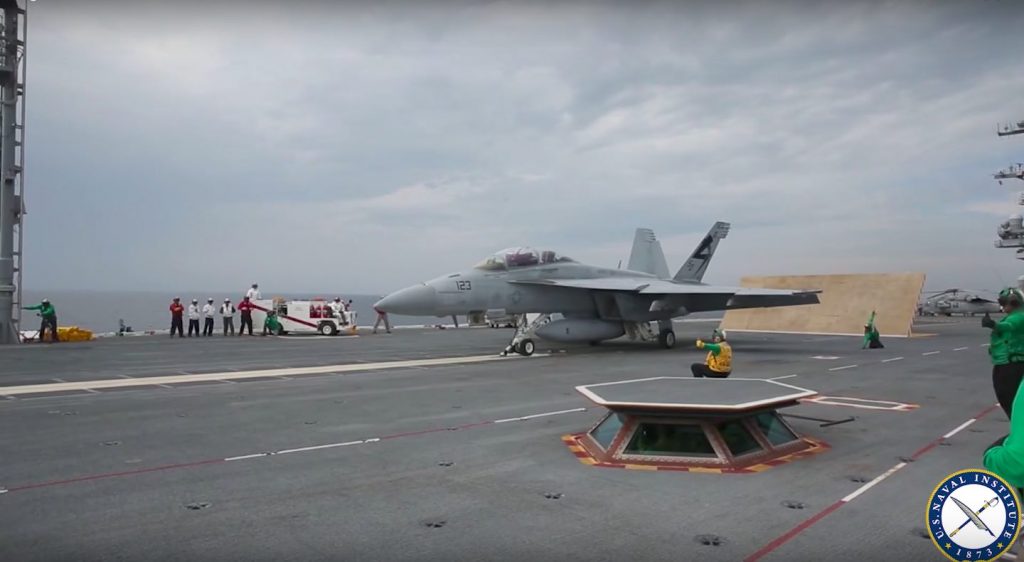 Captain Rick McCormack, the USS Gerald R. Ford’s commanding officer, suggests a more upbeat story, telling the press, "AAG and EMALS have been successfully tested ashore at Lakehurst, New Jersey, but this is the first shipboard recovery and launch of a fleet fixed wing aircraft.”

The new Electromagnetic Aircraft Launch System design is reported to be simpler, require less crew and maintenance staff to operate it and offer more range of power. Aircraft recovery technology also got an upgrade on the Ford. Rather than the old method of an arresting wire system, that uses hydraulics to ‘catch’ the incoming aircraft, the new Advanced Arresting Gear (AAG) system relies on electric motors and energy recovery systems to power down the jets. The AAG system is also computer controlled, which again reduces the need for excessive crew input. The system can also be easily adjusted to allow for heavy fighter jets or smaller and lighter drones.

Hyper-Realistic Fighter-Jet Crash Simulation Over the US Causes Worry