The USA Navy is moving towards installing a 3D headset and 3D screen in the rift, which will help the sailors to get acute information about the nature of their surroundings. 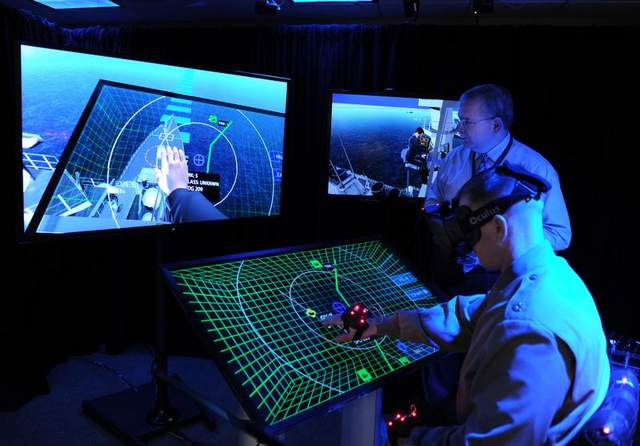 Two parallel laboratories, situated in Washington DC and Marina Del Rey CA, are making virtual reality headsets with a 3D screen for the USA Navy. The system is called Blue Shark. It is a joint initiative by the Swampworks Division of the Office of Naval Research and the USA Institute for Creative Technologies. A marine will be able to direct a virtual UAV while gazing into the ship with touch screen display.

The  Rift has a wider view of 140 degrees and 5HMD in its VR headgear. This is developed by Fakespace Labs. This system can track the user’s hands, head and even chair with its glowing red LED light. The screen situated on the left of the special headset user, is a large touchscreen.

They are also going to repair high tech parts of the ship instantly, without going to laboratory for repairing. The user can control the system panel touchpad just through a wave, he or she won't need to touch the switches in order to give commands.

This Blue Shark system generated some controversies, it's not a virtual reality as it had originally been projected. The touch capabilities and interface usage for the US Navy, for which the system was created, is very weak. Technological innovations of holographic displays and augmented reality windows hasn't been perfected as of today, however as one of the directors of the USC project, Mark Bolas had mentioned, the technologies can be mocked up in the head mounted display.

VR Headsets Work through a Combination of Different Tracking Technologies