The Kenyan High Court took a bold and swift move on Monday to ban the use, distribution and purchase of plastic bags, backing up the decision with the threat of serious penalties or jail time. The government has made efforts this week to create strong support for the new law, despite mixed reactions from local plastic manufacturers and workers employed in the informal recycling industry. As the law continues to be enforced, discussions about its effectiveness and feasibility will continue.

On Monday, the high court in Kenya made a strong statement about the fate of plastic bags in the country with a decision to impose a heavy ban. Violators could face up to a $38,000 fine or four years in prison. Some are calling the decision the harshest punishments for plastics usage in the world.

This is the third time in 10 years that the country has instituted a ban on plastic bags. What’s more, it is not only plastic bag use which is now considered a violation; manufacture and importation are included as well.

This law has not been welcomed by everyone in the country of course. Those who earn a living from the plastic recycling industry—an informal network of laborers who collect, sort through and resell the recovered plastic to manufacturers—feel that their livelihood may be threatened.

There are currently more than 40 countries that have created similar laws in Africa—Mali, Tanzania, Uganda, Ethiopia, Malawi Guinea-Bissau, Mauritania and Cameroon are among them. However, the severity of the penalties is by far the strongest in Kenya.

“The problem with this is that now we are also ingesting these microplastics. And this is a danger to our health,” Minister of Environment Judi Wakhungui stressed. He added that “Ordinary wananchi will not be harmed." The word 'Wananchi' is a Kiswahili word meaning “common man," hinting at fears that everyone will become a target of this new law. However, the court's decision is mostly aimed at manufacturers and sellers.

For largely agricultural developing countries like Kenya, the impact of plastics is much more visible. Regarding the new law, the most striking words came from Veterinary Officer Mbuthi Kinyanjui: “We noticed we are pulling more and more plastic papers out of animals or out of the stomachs of these animals[,] so I would say these are growing concerns.”

Steps Towards Providing an Alternative for the Informal Recycling Network

Proper waste removal and management is an unavoidable issue in every country in the world. Pressures are mounting more now than ever due to the omnipresence of plastic products, as the classic debate of human versus mechanized labor (with suitable technology to support efforts) continues.

In developing countries, informal recycling has filled some of the gaps in waste collection created by poor economy or infrastructure. Due to the economic benefits, many workers cope with the health risks undoubtedly associated with wading through and handling debris for hours on end each day. 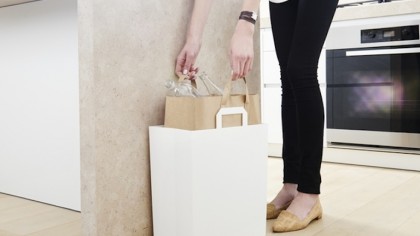 In the last decade, there has been a growing body of literature surrounding informal recycling, about its origins, and more importantly, about ways to provide money-making alternatives.

However, for the thousands of people in Africa alone who depend on this work to generate income, anti-plastic waste laws must developed in conjunction with, not in opposition to, efforts being made in civil society to provide work alternatives to those employed in this industry.