Italian architects have unveiled a concept design for a contained vertical city. The 180 level structure would sit on the sea floor and generate its own electricity supply.

Rising sea levels are causing massive destruction to low lying parts of the globe. In the Pacific Ocean, there has been already an estimated loss of five uninhabited islands to sea level rise. In response to this global catastrophe, Italian architect, Luca Curci has revealed new concept plans for a water-dominated world.

While Curci isn’t going as far as a Waterworld type scenario, this new design does provide a glimpse into what architecture without land could look like. The building is a cylindrical tower that is embedded into the sea floor. Called Vertical Tower City, the futuristic design consists of 180 floors of the multipurpose building to reach a total height of 750 meters.

The building is designed to be totally self-contained. Its facade is created from photovoltaic glass that would also serve as the buildings energy supply as well as being an energy source for buildings still remaining on the ‘mainland’. The tower would be built from modular pieces of architecture that fit together to form the overall structure. These sections would be prefabricated and lowered into position. On each floor of the tower, there is a significant area of green space to provide the residents that live there access to fresh air and good quality of life. There would also be the possibility for agriculture to be grown in these areas providing food for residents.

Each layer of the building has different layout and functions to satisfy the requirements for different types of housing accommodation from villas to smaller apartments. Below the water level would be the service floor and transportation storage. The architects also propose for some luxury hotel rooms to be at this level to provide a totally unique accommodation offering.

The tower would be accessed via water and air and land. The level at water level would have opening and access points for boats and other marine craft to enter and dock. And the tower itself would be connected to the mainland via a series of semi-submerged bridges for pedestrians and supplies. The bridges would also have an electric public transport system in them that would allow its residents to commute back and forth to the mainland. The tower, of course, would also have helicopter access via the top floor.

Luca Curci Architects work across architectural forms and scales. They have in the past designed smaller private dwelling as well as being part of large urban design master plans. The team also passionately pursues furniture design, interior design and industrial design. This project is the culmination of many years of research and design testing. 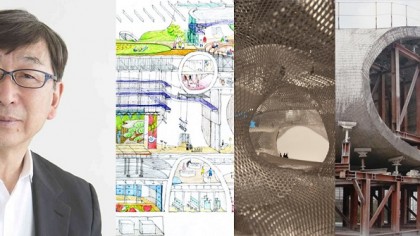 Tower of Wind Emerges Out of Tokyo Bay

While there are no plans for the construction of the Vertical Tower City, the release of the concept plans aims to ignite a conversation about the future of our modern cities. In a world where populations are exponentially increasing, housing and quality of life is a serious question for all major urban areas. The Vertical City Tower relies on the traditional form of the high-density tower in conjunction with cutting edge technology to offer a form of city life that is both sustainable and luxurious.