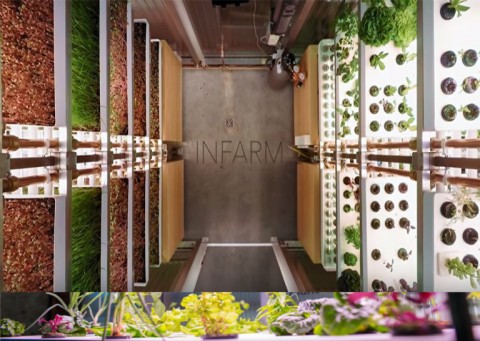 Have you ever considered how absurd it is to go to a grocery store, buy a head of lettuce, and then later on notice that it came from somewhere really far away like Chile? How many planes, trains and trucks did it take for that head of lettuce to arrive in your refrigerator? How much gas and total energy was used in the process and how many hands passed over that lettuce to make it to your home? If you think about such things, it strikes you that this model is the opposite of intelligent design.

Let's face it: it's wasteful and absurd. We're living in the so-called intelligent design era, but we're eating from plates designed by energy-wasting dull palates from the industrial past. Well, that past may finally be coming to end with INFARM. What's INFARM?

INFARM does a great job of describing itself:

INFARM is located in Berlin, Germany and is truly revolutionary because its vertical farms utilize space and energy in an optimal manner. It completely does away with wasteful energy practices that currently dominate modern grocery stores. No pesticides are used, an app is utilized to bring farm management to the palm of your hand, it's cost-effective, the vegetables are fresher, more nutrient-dense and the team at INFARM consists of plant scientists, robotics specialists, industrial designers, IT wizards, architects, futurists and chefs. It's unique because it employs farming as a service business model. By providing the technical growing knowledge in an easy-to-digest and implement manner, this system has a serious chance at being adopted on a mass scale and very soon at that.

A wholesale store in Germany, part of the Metro Cash and Carry group currently carries the INFARM vertical farming system and is the first grocery store in Europe to do so. 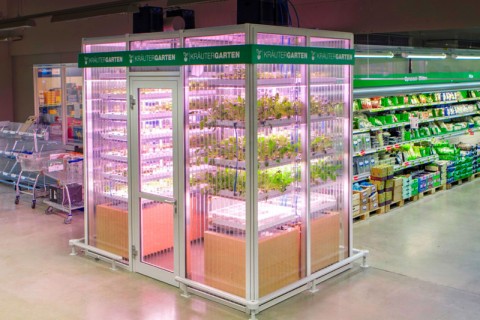 According to Ray Kurzweil, Director of Engineering at Google, "The 2020's will be the decade of the vertical farming revolution." Ray Kurzweil is no stranger to innovation and knowing where the future is headed. To slightly get off-tangent, Kurzweil believes that humans will be hybrids by 2030. CNN Money wrote an article about Kurzweil:

"Kurzweil, who is known as one the world's leading inventors, has predicted what the future will look like before. In the '90s, he made 147 predictions for 2009. In 2010, he reviewed his predictions, 86% of which were correct. He gave himself a "B" grade."

So, as far as vertical farming goes, it appears that it's not a question of how but when. If I had a grocery store chain, I would be doing some serious investigation and adoption of the systems that INFARM has designed right now. There seems to be a tremendous opportunity waiting to happen. This vertical farming revolution coincides well with the organic movement and the trend of consumers wanting to know where their food comes from. It appears that the future of food is going to be non-GMO, pesticide-free, tasty, available 365 days per year and extremely energy and cost efficient.