His work helped get America’s first satellite into orbit, launch the first mission to the moon, and change the course of history.

Villain or visionary? Space travel today would not have existed if it were not for Wernher Von Braun. The scientist was a rocket science prodigy, with his research shaping the American space program, contributing rocket technology that is still being used to this day.

Nevertheless, his past work with the Nazi’s followed him throughout his career, looming over his accomplishments.

Finishing his Ph.D. by the age of 22, Braun was a force to be reckoned with even at a young age. Born in Wirsitz, Germany ( now Wyrzysk, Poland) Wernher Magnus Maximilian Freiherr Von Braun was a rocket scientist, aerospace engineer, beginning his research in rocket technology in Nazi Germany during  World War II, before perfecting his ideas for NASA in the United States.

SEE ALSO: EVERYTHING YOU NEED TO KNOW ABOUT SPACEX'S FIRST FLACON HEAVY FLIGHT

Von Braun Facts: Wernher Von Braun originally failed his courses in mathematics and in physics eventually falling in love with subjects after learning about astronomy.

Taking a few steps back, Wernher Von Braun did not like the world of mathematics and physics, opting in to focus his energy on language while in school. Even more so, this caused him to fail those subjects.

Nevertheless, after hearing about the theories of space flight and the field of astronomy Braun’s interest in the subjects of mathematics and physics were rekindled, pushing him to excel to such a point that he was considered one of the brightest emerging minds in Germany by his early twenties.

His thesis at the University of Berlin, “About Combustion Tests,” contained theoretical investigation and developmental experiments on 300- and 660-pound-thrust rocket engines.

By 1934 alongside his team, the rocket society, Braun had launched two rockets that rose vertically to more than 1.5 miles. However, due to the Nazi’s rise to power, it was decreed that rocket tests were to be forbidden unless it was through the current military forces.

Von Braun Facts: Wernher Von Braun joined the Nazi Party on November 12, 1937. However, he claimed that he was coerced by the SS.

Though it up for debate, some believe that Braun joined the Nazi party because of his desire to continue his research. Nevertheless, it has been documented that Braun did not want his research used for military purposes. Braun even stated that he was coerced into working with the Nazi party.

While working for the Nazis, the Braun led the team that created the deadly V-2 missile, “vengeance weapon”, used in World War II. 14 meters long and weighing in at 13,200 kg, the long-range ballistic missile was able to produce 60,000 pounds of thrust while burning on the unorthodox fuel alcohol and liquid oxygen.

Even more so, Wernher Von Braun’s creation could carry a 1,000 kg warhead and travel as fast a 5,600 km per hour. The V2 marked an important moment in history as this powerful weapon became the first human-made object to reach the threshold of space, flying to an altitude of 80 km. 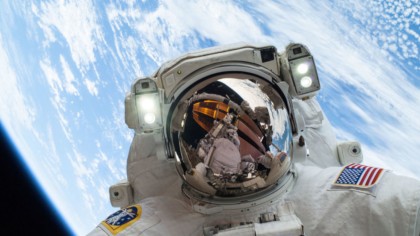 Space Programs Around The World

Though the Braun weapon was destructive during WWII, responsible for the deaths of nearly 3,000 people, the rocket was not accurate with approximately ⅕ hitting their set targets.

As mentioned above there is some evidence that points to Wernher von Braun’s distaste for the Nazis and the use of his research for the purpose of war, going as far as being investigated by the Nazis because of his potential lack of loyalty.

Sensing the fall of the Nazis towards the end of WWII, Wernher von Braun preserved his research, even though he was ordered to destroy it. Eventually, Von Braun and his team surrendered to the United States Army, as part of Operation Paperclip.

For the uninitiated, Operation Paperclip was an opportunity for the United States to utilize the mind power of some of the brilliant minds that worked in Germany during WWII. More than 1,600 German scientists, engineers, and technicians were taken from Germany to America, including  Wernher Von Braun.

Wernher Von Braun would go on to demonstrate his V-2 technology to the United States where both his expertise and knowledge earned him the position of Director of NASA’s Marshall Space Flight Center.

His research here at NASA would very literally change the world, leading the team that would go on to create the Saturn V rocket.

The Saturn V Rocket and Beyond

The Saturn V rocket is what was used to put humankind on the moon, making it one of the most famous, largest, and most powerful rockets in history. The rocket was also used to launch the Skylab space station. The Saturn V was a product of Wernher Von Braun’s work.

Standing 111 meters tall and weighing in at 2.8 million kilograms, the rocket generated 34.5 million newtons of thrust at launch, creating more power than 85 Hoover Dams. However, there was something very impressive about Wernher Von Braun’s rocket aside from its size.

The Three Stages of Space Flight

Braun’s Saturn V broke down space flight into three stages. During liftoff, the rocket would separate itself into three stages a way to propel itself out of our atmosphere with each stage burning off its engines until it was out of fuel, then separating from the rocket.

Wernher Von Braun’s five first stage engines are still the most powerful single-chamber liquid-fueled rocket engines ever made. Braun spent the rest of his career using his mind for many U.S. agencies eventually awarded the prestigious National Medal of Science. Wernher Von Braun passed away on June 16, 1977.