The flight from Florida to UK marked the first time ever a commercial craft was flown using biotech startup LanzaTech's much-discussed sustainable jet fuel made from recycled waste.

Virgin Atlantic took to social media yesterday to celebrate the landing of its Boeing 747-400 G-VROM (Barbarella) at Gatwick airport in the United Kingdom (UK). Although it is not uncommon to see the airline's planes arrive at the airport, this particular journey gave much cause for celebration

In fact, as the firm took to Twitter to announce, the trip made aviation history. The flight from Orlando, Florida marked the first time ever a commercial craft was flown using biotech startup LanzaTech's much-discussed sustainable fuel.

Today we made aviation history. Find out more about our world first flight with @LanzaTech and their #SustainableAviationFuel https://t.co/qYibdpwzB0 pic.twitter.com/zFfjEstQHu

A landmark step towards sustainable aviation

The aviation firm referred to the event as a "landmark step towards making commercially-viable sustainable aviation fuel a reality." And the ceremony saw none other than Virgin Group founder Sir Richard Branson marshall the aircraft into its stand.

“Long haul travel is more important than ever for connecting people around the world. And it’s our responsibility to ensure we’re doing that in the most sustainable way possible," said Branson in a statement.

"Working with LanzaTech will enable us to drastically reduce our carbon emissions and at the same time, help support UK industry. That’s why we’re so excited to showcase this fuel on its first commercial flight as we plan for the world’s first full scale jet fuel plant using this amazing new technology.” 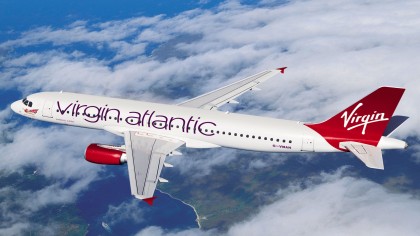 Just last July, the UK Government granted LanzaTech a £410K grant to determine the feasibility of building a 40-50million US gallon jet fuel plant in Britain. “This waste to jet fuel project has the potential to help transform the aviation industry by reducing greenhouse gas emissions and improving the air quality around our country’s airports,” said, at the time, Chris Grayling, UK Transport Secretary.

LanzaTech produces its sustainable biofuels by recycling waste industrial gases such as those produced from heavy industrial processes. The company's process sees these waste, carbon-rich gases turned first to ethanol and then to a range of low carbon products, including jet fuel.

“Today, with our carbon smart partner, Virgin Atlantic, we have shown that recycling waste carbon emissions into jet fuel is not impossible, that waste carbon needs to be thought as an opportunity not a liability, that carbon can be reused over and over again," said Jennifer Holmgren, CEO at LanzaTech.

We’ve landed! The first commercial flight using LanzaTech sustainable jet fuel was our VS16 from Orlando to London Gatwick, operated by a Boeing 747 aircraft. pic.twitter.com/NgWPVfPPYM

Virgin Atlantic further called on the UK government to commit to making this eco-friendly fuel a commercial reality in the UK by supporting LanzaTech in establishing and running three UK plants by 2025. This would allow the startup to produce up to 125 million gallons of sustainable fuel per year resulting in the saving of nearly 1 million tonnes of life-cycle carbon.