The Space Kingdom of Asgardia has sent its first satellite to space. The so-called 'space nation' has plans to eventually start a colony in space.

The ‘virtual kingdom’ of Asgardia has launched its first satellite. Asgardia is the brainchild of Russian billionaire and scientist Igor Ashurbeyli who has long-term plans for the nation to start a colony in space. The first satellite of the fledgling nation was launched from NASA’s Wallops Flight Facility in Virginia. The loaf of bread sized satellite was sent off aboard a Cygnus spacecraft on an Orbital ATK Antares rocket. The satellite contains half a terabyte of data with crucial information about the new nation including the nation's constitution, its national symbols, and information about each of its 115,000 official citizens. Each citizen that accepted the Constitution is allowed to send data up to the satellite. The Asgardia website indicates that it did an open call to people who had that registered on asgardia.space, those that were willing to accept the constitution of the nation could send up 500KB each. Following this offer, the next 400,000 registered Asgardians could send 200KB. The next million citizens to register and accept the Constitution can send up to 100KB each. After that, free storage on the satellite will be closed.

Asgardia not recognized by the UN

The satellite will have an eventful journey before its release. The rocket will first dock with the International Space Station later this week to deliver supplies to the current cohort of astronauts. It will stay there for roughly a month before flying higher above the earth to release the Asgardian satellite. 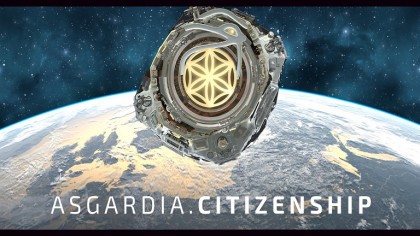 This is just the first step in Ashurbeyli's ambitious plan to start a space nation, there is still a lot of work to be done on Earth just to convince people of Asgardia's nation status. Ashurbeyli will need a serious plan before he can convince the UN of Asgardia's worth, but that hasn’t stopped its 100,000 citizens from committing to the project. Founding member of the Asgardia, Ram Jakhu, previously outlined the nation's methods for development: “We’ll start small and eventually people will be going there, and working, and having their own rules and regulations … This facility will become an independent nation.”

Unsurprisingly, the idea has a lot of critics with many claiming the project is a way for billionaires to avoid tax and other regulations on earth. Professor of international law at Western Sydney University, Steven Freeland suggests that there will be other individuals who will take advantage of law free space before international regulations come into play. He says, “Ultimately people will get married in space, have babies in space, and murder each other in space. You need concrete proposals, and I think a project like this helps that along.”

Becoming a citizen of Asgardia is a simple process of filling in an online form. Once accepted as a citizen you’ll be able to participate in leadership elections, run for Parliament and file petitions. In fact, elections are being held now. According to the Asgardian website, its parliament is comprised of 13 electoral districts. Each district is a territorial subdivision for electing Members of Parliament (MPs). You can read about each of the new parliamentary candidates here.