Vodafone plans to install the first 4G network on the Moon in 2019 to support a mission by PTScientists, with Nokia as its partner.

Vodafone and Nokia plan to have a 4G mobile network installed next year through a mission, organized by Berlin-based space exploration company PTScientists, according to a news release by Vodafone.

This will be the first ever privately-funded Moon landing. Nokia masts will be launched in 2019 on a SpaceX rocket from Cape Canaveral Air Force Station in Florida, USA.

Audi lunar exploration vehicles will be able to communicate with each other through the network and with a base station.

Vodafone will provide the 4G signal to transmit high-definition video streaming of the Moon’s surface.

“It is also a great example of an independent, multi-skilled team achieving an objective of immense significance through their courage, pioneering spirit and inventiveness,” he said.

The vehicles will be exploring the Moon as a potential habitat for humans to live in. The introduction of a 4G network will hopefully be the first step towards creating a communications infrastructure for future missions to the Moon.

Vodafone’s network will connect two Audi lunar quattro rovers to a base station in the Autonomous Landing and Navigation Module (ALINA).

Nokia will create a space-grade Ultra Compact Network through Nokia Bell Labs. This will be the lightest ever developed, weighing less than one kilo.

The 4G network will enable the Audi lunar quattro rovers to communicate and transfer scientific data and HD video.

The rovers will be approaching and studying NASA’s Apollo 17 lunar roving vehicle which was used by the last astronauts to walk on the Moon, Commander Eugene Cernan and Harrison Schmitt, who explored the Taurus-Littrow valley in December 1972.

Vodafone testing shows that the base station should be able to broadcast 4G using the 1800 MHz frequency band and send back the first-ever live HD video feed of the Moon’s surface.

This will then be broadcast to a global audience through a deep space link that interconnects with the PTScientists server in the Mission Control Centre in Berlin.

The network will help save energy, as mobile signals are more energy efficient than analog radio. “The great thing about this LTE solution is that it saves so much power, and the less energy we use sending data, the more we have to do science”, Robert Böhme, CEO of PTScientists, said.

“In order for humanity to leave the cradle of Earth, we need to develop infrastructures beyond our home planet,” he added. 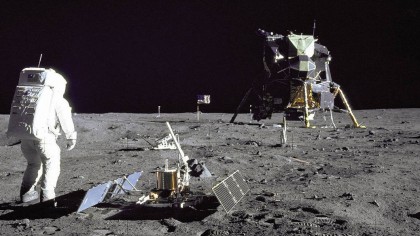 “It will [also] help advance the communications infrastructure required for academics, industry and educational institutions in conducting lunar research. These aims have potentially wide-ranging implications for many stakeholders and humanity as a whole, and we look forward to working closely with Vodafone and the other partners in the coming months, prior to the launch in 2019.”