Most people who live in a major city know about articulated buses. They have the accordion-looking connection in the middle of two cars.

Volvo just announced its Gran Artic 300, an articulated bus longer than any other. This bus has double articulation, which might not be impressive without its length attached. 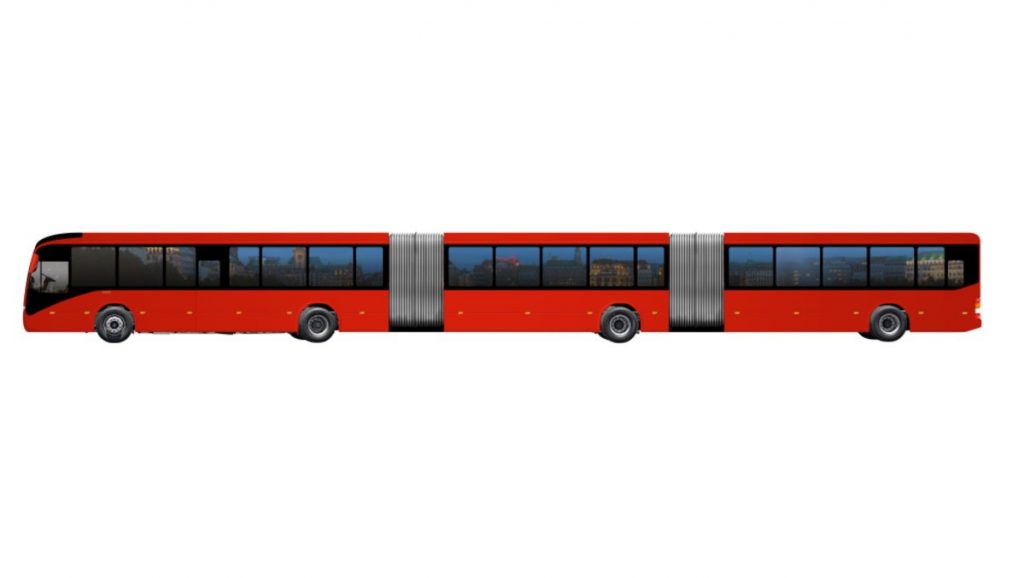 It's 98 feet long. For reference, the Gran Artic 300 runs a third of a football field. That length also packs more people than any other city bus. A standard city bus packs 55-60 people on average. New York Subway cars pack 255 passengers (not squishing everyone onto the car). Volvo boasts that the Gran Artic 300 can carry 300 people, with eight people per square meter.

In addition to its two articulated joints, the bus chassis will have four axles and five doors.

“We are leaders in vehicles for high-capacity transportation systems, Bus Rapid Transit, and now we introduce the world’s largest bus chassis. This vehicle will provide more efficient transportation systems, offering a higher quality for the passengers and improved cost efficiency for the transport operators,” said Fabiano Todeschini of Volvo Bus Latin America.

Volvo debut the bus in Rio de Janeiro, and the location plays a crucial role to the bus's success. Volvo hopes the buses will become part of the Bus Rapid Transit system in Rio. More specifically, the buses would service the currently-incomplete TransBrasil line. The 14-mile route runs through the heart of Rio. It gets its own lane, a speed of 22 mph and 16 stations. The system can carry 55,000 passengers in an hour, up to 820,000 a day. Most BRT articulated buses run around 80 feet in length.

Can the United States expect to see these buses in its transit system? Probably not. The Institute for Transportation and Development policy published a list of BRT standards, and not one US transit system meets the gold standard. Several cities hit bronze, including Cleveland, Los Angeles and Pittsburgh. But cities like New York City don't even make the cut, ranking only at 35 on the scale. Roads in the United States's largest cities simply don't have a big enough road space (intersections, turn lanes, etc) for these behemoth buses to move.

The United States has little interest in a unified mass transit project, however, as BRT infrastructure costs more than a typical bus system. Brazil will spend $400 million on TransBrasil bus line.

With such a massive new bus, one can expect some rather large problems. For one, the bus doesn't turn well (no shock there given its length). It's designed for "very straight bus lines, with not many curves" said Vukan Vuchic, a retired transportation systems engineer, to Wired.

AutoBlog noted the entire Artic range is massive. The baby Artic takes up 61 feet and can carry between 150 to 180 passengers depending on its version. The Super Artic 210 can theoretically handle 30 more passengers than the Gran and would be 3.2 ft longer.

No word yet as to when Volvo will put these buses out on the roads of Rio.

Build your very own 20-ton hydraulic press from scrap