Volvo has unveiled its 360c concept car, a fully autonomous pleasure vehicle design with both the best technology and luxury money can buy. The 360c is the highest rated autonomous car - a level 5 - meaning it is computer-controlled in all environments and situations.

Rather than positioning itself as a buy to drive production car, Volvo sees the 360c as a something business may buy in groups and offer to their employees or clients as perks. The 360c offers luxurious fully automated travel with additional pleasures, like in-car coffee making and a silent ride.

The autonomous car won’t even have a steering wheel. The car will communicate with its external environment through a series of exterior lights that project a range of colors in addition to sounds and other visual elements.

While the 360c is an exciting vehicle, for now, it is firmly a concept car, meaning it won’t go into production anytime soon. However, concept cars often serve as testing ground for technology that does find itself inside production vehicles.

In addition to tech testing, the 360c gives Volvo a platform to show off their vision for the future of autonomous driving. The company is making a strong statement that they are not only ready to embrace autonomous driving but to be a leader in disrupting the way we understand travel generally.

“The business will change in the coming years and Volvo should lead that change of our industry,” said Volvo Cars president and CEO Håkan Samuelsson. “Autonomous drive will allow us to take the big next step in safety but also open up exciting new business models and allow consumers to spend time in the car doing what they want to do.”

The 360c is portrayed as a place of comfort and rest. Images released along with its unveiling in Sweden show its occupants, sleeping, having a business meeting and enjoying breakfast. These images point to Volvo’s idea that a luxurious autonomous car may be a real alternative to domestic air travel.

Volvo has indicated that they are a “potentially lucrative competitor to short-haul air travel." 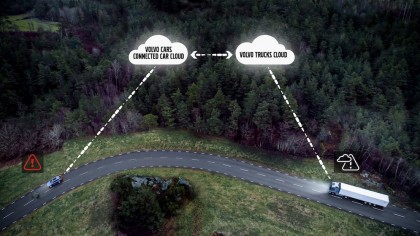 Volvo suggests that for shorter routes, where the distance between origin and destination is around 300 kilometers, going by car is faster and more comfortable.

“Domestic air travel sounds great when you buy your ticket, but it really isn’t. The 360c represents what could be a whole new take on the industry,” said Mårten Levenstam, senior vice president of corporate strategy at Volvo Cars. “The sleeping cabin allows you to enjoy premium comfort and peaceful travel through the night and wake up refreshed at your destination. It could enable us to compete with the world’s leading aircraft makers.”