Wall climbing robot that can carry 100 times its own weight

Stanford engineers are getting ready to reveal their new tiny robot that perhaps should have the name Superman as it is extremely strong. The reveal is taking place at the International Conference on Robotics and Automation which is held in Seattle. The small robot can not only carry many times of its own weight, it can do this while climbing up a wall (maybe we shoulda said Spiderman). 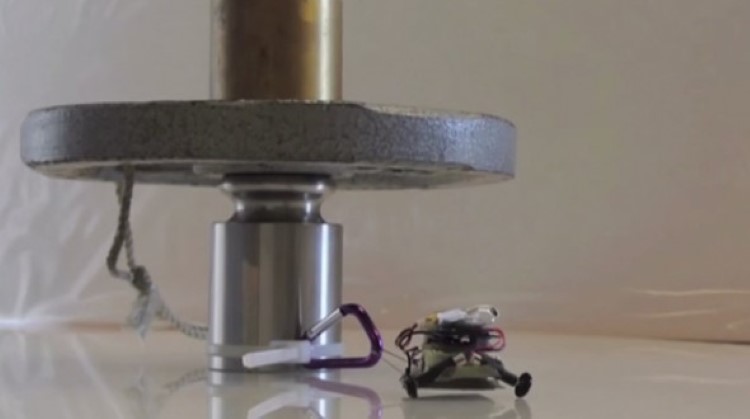 The robot seen here is climbing a vertical wall while at the same time carrying 100 times its own weight. This is the smallest robot to have been created at Stanford. One of their robots is able to carry 500 milligrams while its own body weight is just 20 milligrams. It may only be carrying a paperclip but bear in mind that the robot itself is so tiny that it had to be assembled underneath a microscope.

uTug is the even more powerful as it can drag weights of up to 2,000 times heavier than its own body weight. It weighs just 12 grams and can carry around 24 kilograms. This is the equivalent to a human being walking around dragging a blue whale behind them.

The incredible strength of the robots is down to powerful motors and superb traction. The engineers working on the robots gave them feet that take inspiration from that of a gecko. The feet have an adhesive surface which has tiny rubber spikes that allow the robot to stick to the surface. If downward pressure is applied the spikes are able to bend, this gives them increased surface area and therefore high adhesion. As soon as the robot lifts its foot the spikes straighten out.

The locomotion of the robot means that it moves slow and one foot has to stay planted to anchor the weight of the robot. The designers behind the robot believe that the robot will come in handy in construction to carry items that are heavy and which need to be hauled around.