Two new patents filed by the retail goliath Walmart could hint that the company will seek blockchain technology for data storage.

Both applications were published earlier this week by the United States Patent and Trademark Office (USPTO). Both applications refer to blockchain-powered platforms in order to secure payment information. Both documents were also submitted in mid-October 2017.

Neither filing directly mentions or refers to a permissioned blockchain -- the type that allows particular parties to operate nodes. However, the system described in the application would operate as a permissioned blockchain. Customers would be able to see their payment histories without third-parties being able to see the payment histories of customers.

The initial patent filed describes the proposed vendor payment system. It is a network that could automatically do transactions on a customer's behalf. Payments would then be received by one or more vendors depending on the services provided to the customer and exactly which vendors provided those services, the patent said.

A secondary application talked about an emphasis on digital shopping and using blockchain to encrypt payment information to also keep it out of the hands of third-party vendors.

This is far from the only blockchain-related patents filed by Walmart in recent months. In early March, the company filed a patent for a smart package that would leverage blockchain to improve tracking capabilities.

"These online customers many times seek to purchase items that may require a controlled environment and further seek to have greater security in the shipping packaging that the items are shipped in." Walmart said in the filing.

In 2017, the ubiquitous global retailer partnered with Kroger, Nestle, and other industry firms to improve food traceability. The initiative was to use blockchain in order to increase the transparency and authenticity about where food sold in these respective stores really comes from.

There was also a similar filing for using blockchain to track unmanned drones. That application went live on the USPTO website last May. 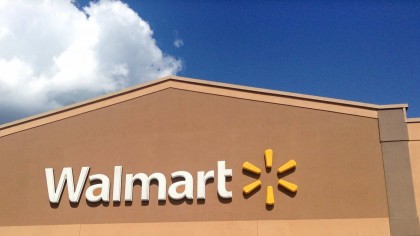 "In some embodiments, the delivery box may also include a delivery encryption system comprising a blockchain for package tracking and authentication. Package tracking by blockchain may include elements including but not limited to location, supply chain transition, authentication of the courier and customer, ambient temperature of the container, temperature of the product if available, acceptable thresholds for ambient temperature of the product, package contents placed in the container system (products & goods), or a combination thereof." Walmart said in the application.

The company has yet to make a statement regarding how or when it plans on using this technology, or even if there's an opt-out option for its customers.