The shopping center behemoth Walmart recently filed a patent for autonomous robotic bees or "pollination drones." While the company hasn't made many public statements, this could be a sign that it's venturing further into the realm of their own crop production and expand its own agricultural practices.

The patent was one of five farming drone patents, including one that serves as a pest identification system, and another that tracks the health of crops and predicts yields.

For modern sci-fi fans, the bee concept sounds eerily similar to the episode of Black Mirror when a hijacker reprogrammed swarms of robotic bees to kill people. However, hopefully, the family-founded shopping giant would be significantly less sinister.

The patent discovery comes just days after Walmart announced it wanted to grow its grocery delivery system to include 800 of its stores. The goal is to provide reach to over 40 percent of US homes. Speedy delivery in just hours time would put Walmart in the lead among other grocery-store competitors offering similar services, clearly by the ubiquity of the Walmart brand.

"We're always thinking about new concepts and ways that will help us further enhance how we service customers, but we don't have any further details to share on these patents at this time," a spokesperson for Walmart emailed CBS News. 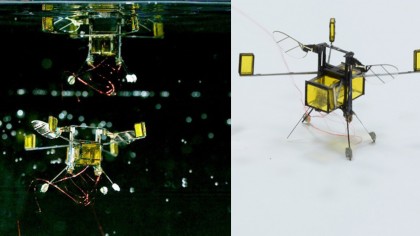 The bee population is dropping off in unparalleled numbers. Between 2016 - 2017, beekeepers in the United States lost 33 percent of their bees. While those losses are lower than they've been in the worst years, the consistent death of the bee population means trouble for crop production, researchers said. Bees pollinate nearly one-third of the food humans regularly eat, and researchers have tracked the reasoning behind the rapid deaths to colony collapse disorder -- largely caused by particular pesticide usage over long periods of time.

"While it is encouraging that losses are lower than in the past, I would stop short of calling this 'good' news," said Dennis vanEngelsdorp, an assistant professor of entomology at the University of Maryland and project director for the Bee Informed Partnership. "Colony loss of more than 30 percent over the entire year is high. It's hard to imagine any other agricultural sector being able to stay in business with such consistently high losses."

It was enough for Harvard University researchers to develop RoboBees several years ago. The original bee was "half the size of a paperclip" and weighed less than a tenth of a gram. The tiny robot required engineers and biologists to collaborate on developing new flight muscles scaled to fit the small robo-bodies.

"This project provides a common motivation for scientists and engineers across the university to build smaller batteries, to design more efficient control systems, and to create stronger, more lightweight materials," said professor of engineering and applied sciences Robert Wood. "You might not expect all of these people to work together: vision experts, biologists, materials scientists, electrical engineers. What do they have in common? Well, they all enjoy solving really hard problems."

Since the Harvard bee drone breakthrough, other universities and engineering teams have made similar drones based off of other insects. Additionally, farmers have started using drones for produce checks and monitoring crops in place of humans. Combining the two styles of technology could be an interesting investment, especially if Walmart pursued expanding its own company's crop production.