Warm Caves Beneath Antarctica's Ice Could Be Home to Unknown Species

Scientists discovered a sub-glacial cave on a Ross Island expedition in Antarctica. They believe that future expeditions will uncover not only new data, but also possibly reveal evidence of new species existing in the ecosystem.

Most of the stories we are hearing from Antarctica usually involve teams of scientists on expeditions collecting ice samples and other important data used for understanding the effects of human activity on the climate, or tourists looking for a change to the travelling experience making a trip from Tierra del Fuego, the southernmost tip of Argentina, which is only a stone’s throw away from Antarctica.

For this reason, scientists’ discovery last week of a warm oasis beneath the ice sheets is particularly interesting. Scientists found an ice cave on an expedition to Ross Island—part of the Erebus Glacier tongue—created by an active volcano. Most exciting find for scientists is that the ice cave could be host to an unknown number of plants and animals, some of which may include new species. The team collected DNA samples which possess traces from algae, moss or perhaps other small animals, but at this point more expeditions will be necessary to provide concrete evidence.

On the possibility of finding life in the caves and future caves, professor Ceridwen Fraser from Australia National University, who led the expedition—explains, "The results from this study give us a tantalizing glimpse of what might live beneath the ice in Antarctica -– there might even be new species of animals and plants...The next step is to go and have a really good look and see if we can find communities living beneath the ice in Antarctica."

One of the most fascinating finds is the temperature existing inside of the caves—up to 25°C. “You could wear a T-shirt in there and be pretty comfortable,” Fraser adds. “There’s light near the cave mouths, and light filters deeper into some caves where the overlying ice is thin.”

The last two decades have witnessed a significant increase of expeditions to Antarctica. Though the main purposes from the outset were to look for vital clues that would help in understanding the forces that contribute to and worsen the effects of global warming and climate change, the study and documentation of biodiversity has also emerged as an important part of the body of research coming out of expeditions. When we combine the two issues, documentation becomes a crucial means of providing indispensable evidence. 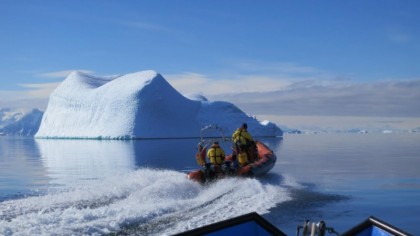 In 2012, the Scientific Committee on Antarctic Research (SCAR) launched the Marine Biodiversity Information Network (MarBIN), an active database which would essentially be used as a repository for any data gathered on marine biodiversity in Antarctica. Bruno Danis, a marine biologist from the Royal Belgian Institute of Natural Sciences, who began work on the database in more than a decade ago, envisioned it as “one-stop, free access tool on biodiversity data to researchers, conservationists and environmental managers dealing with Antarctic marine biodiversity”.

As the scientific community is indicating, the future of plant and animal life on Antarctica is in a very fragile state, so documentation of biodiversity is becoming the same as documenting history. For this reason, these teams of committed scientists are making invaluable contributions.