We already showed you the dating app that uses augmented reality. Now we have a new kind of fun. Developer Abhishek Singh has created a game where you can play Super Mario Bros. in real life with augmented reality. The gameplay requires you to walk through the entire first level from Nintendo's Super Mario Bros. Singh made a video of him playing the game in Central Park wearing an adorable homemade Mario outfit.

Watch Singh walks down an avenue in the park jumping on any Goombas and Koopa Troopas that cross his path. The Super Mario Bros. game is complete with the Fire Flower, Singh launches fireballs with his hands by gesturing where they should go. The game is really well scaled and while making it 3D definitely makes the game easier (you can sidestep!). It is still a totally thrilling experience.

Singh wears Microsoft HoloLens headset to create the experience. The video is brilliant and the game is incredibly accurate. It will definitely please die-hard Super Mario Bros. fans. At the end of the game, we were sure an unobservant passerby was going to ruin the fun as the vision of the player is completely blocked by brick walls.

Singh is a graduate from NYU's Tisch school and is responsible for a bunch of other really cool inventions that you can check out on his  website. We loved ‘hydrate me’ the ''‘smart coaster that tracks your daily water intake by sensing the level of water in your bottle and gives you reminders through the day to regularly hydrate yourself.'' 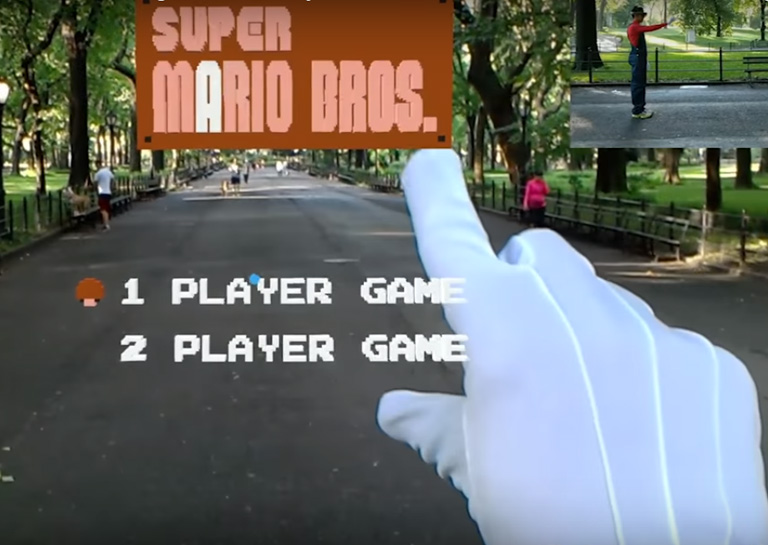 Augmented reality just got easier for designers after Apple released their ARkit. The toolkit will allow developers to create apps that utilize superimposing objects and images in the real world via the iPad or iPad's camera. Apple wants ARkit to be "the largest AR platform in the world." Although they haven’t developed any publicly released app themselves yet, they want the technology to be widely adopted by outside developers.

Competition is already fierce in the hardware side of VR and AR. The headsets that allow a person to experience VR range in price from Sony’s goggles that set you back about $400USD to Google’s $15 USD Google Cardboard. This product is a foldable cardboard headset that you place your phone into to enter a VR environment. There are rumors that Apple wants in on this competition and are working on their headset. But nothing has been confirmed from the company. The revenue from VR and AR is predicted to increase from $5.2 billion in 2016 to over $162 billion in 2020.

Ikea is one of the first companies to team up with Apple’s AR. The Swedish furniture giant announced it would collaborate with Apple to make an AR app that will help customers with making buying choices. Once developed, the app will let you use your iPhone or iPad to check how Ikea furniture will look in your home before you buy it. This isn’t the first foray in AR for Ikea, but the company said this partnership with Apple will create a better and more consistent product.