The previous record was set by Hot Wheels driver, Tanner Foust, at the Indianapolis 500 on May 29th, 2011, jumping a massive 332 feet (about 100 m).  The feat was achieved by dropping over 90 feet (27 m) to gain the speed necessary to clear the jump- and set a world record.

Now, however, Redbull set out to challenge Hot Wheels and attempt a new world record. Menzies, the driver behind the wheel of a 900 HP truck sped down a long open flat in the middle of the desert before hitting the jump at top speed. Guinness World Records officials stood by to verify the distance and give official authentication of if a new record was set.

Fortunately for Redbull, Menzies, armed with his Pro 2 (two-wheel drive) 900 HP race truck, he was able to obliterate the previous official record (301 feet) and jump 78 feet further. Menzies hopes the record jump will kickstart his leap into him racing on a global scale.

To achieve the jump, his Pro 2 truck required heavy modifications to be able to land the jump safely. Starting with the engine, the standard carburetor was swapped out with a direct fuel injecting system. Also, due to the uneven weight distribution, additional weight was added at various parts to ensure a stable flight. Quick throttle control also helps change the pitch in the air. The shock absorbers were also swapped out to provide enough depending on take-off to ensure the truck was not flipped by too much rebound generated by the rear shocks. Following the heavy modifications, the 900 HP monstrous truck was able to conquer the jump, acquiring the world record in the meanwhile. 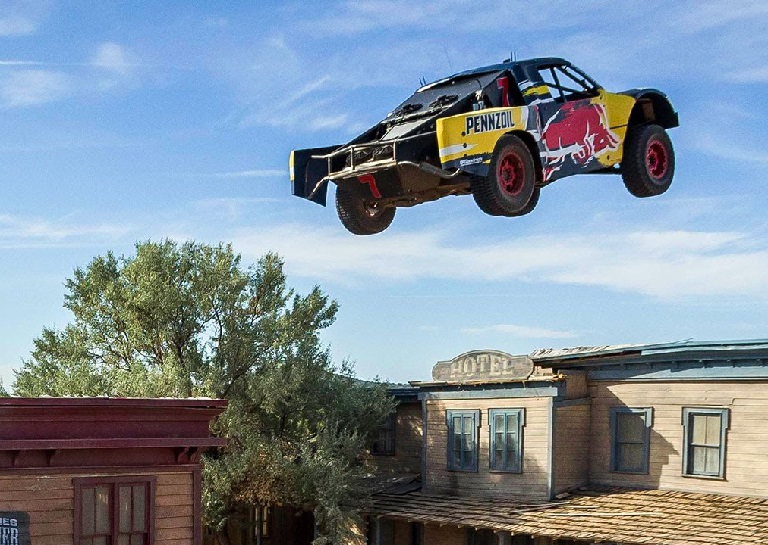 SEE ALSO: Base Jumping into Clouds Will Make Your Palms Sweat