Watch as Drones Weave a Rope Bridge you can Walk Across 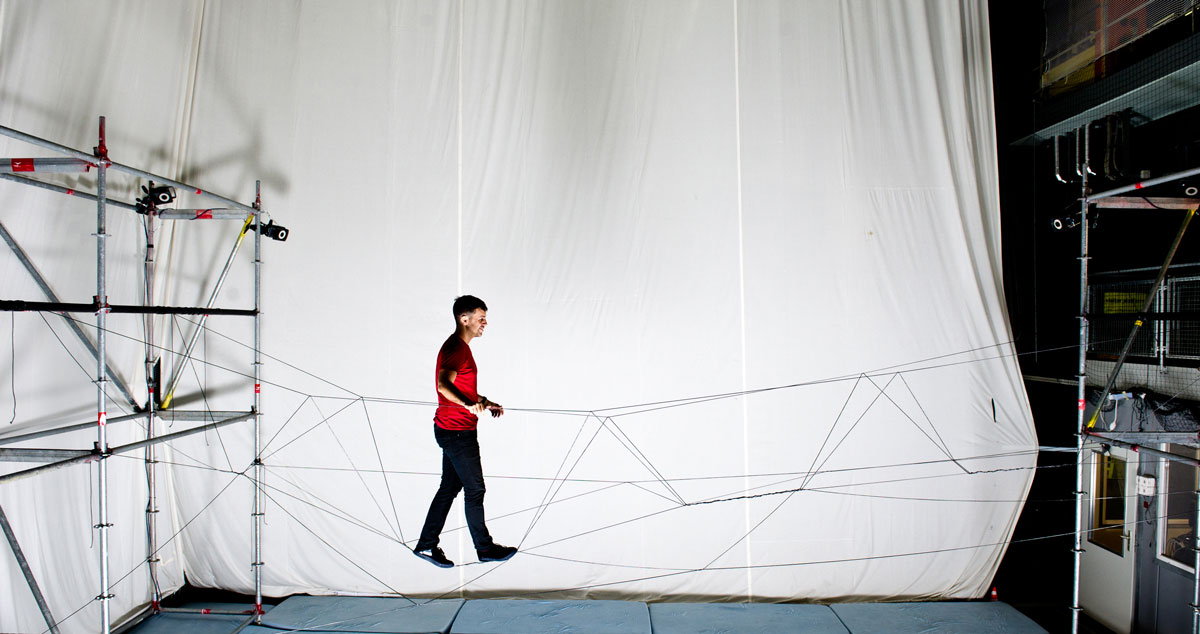 A group of researchers managed to weave together a bridge with enough strength for someone to walk across.

The experiment was conducted at the ETH Zurich Flying Machine Arena in Switzerland. The team set up two scaffolds and attached ropes to the quadrocopters. The drones are completely autonomous and so became the first full-scale structure capable of bearing a load that was built autonomously built by flying machines. The team hopes that this is just a small step in the direction of robotic aerial construction, with many more steps to come.

The bridge is constructed entirely out of Dyneema rope, an optimal candidate for the structure due to its low weight-to-strength ratio and tensile characteristics. The rope weighs merely 7 grams per meter, with a 4mm diameter the rope is able to bear up to 1300 kg. The bridge contains over 120 meters of rope and spans 7.4 meters. It is held together by various rope designs such as braids, links, and knots.

The ETH has a flying arena specifically designed to house these kinds of experiments. The arena contains high tech equipment including a motion capture system that enables researchers to record and monitor vehicle position and altitude. The quadrocopters used are customized to be able to grasp the road and wireless communicate with a computer. The off-board computer contains the algorithms and then relays commands back to the modules.

Before the drones can begin their work engineers must take measurements to input into the system about key points for the robot to recognize such as distance and anchor points. Once the critical points are known, the robot takes over and begins to weave all the conjunctions and links across the bridge- without human intervention. A motorized spool enables the drone to control the tension in the rope. Because of the torque experienced by the quadrocopter as a result of the tension, the system must automatically calculate and adjust the position to ensure the quadrocopters act accordingly.

The entire system can first be simulated on some computational tools developed to specifically analyze different construction sequences. The construction can be fully evaluated and determined if it is feasible before attempting in a real world application. Using this method, the team can determine many different arrangements and possibilities that the drones can carry out.

Building bridges with drones could become an essential part in disaster relief missions all around the globe. For example, during floods people often become stranded because all exit points have been washed out. Often times, time is a major factor in rescue operations and so the people must be extracted quickly. The drones could greatly assist rescue missions by reaching the survivors long before a team could, and then constructing a bridge that would otherwise not be possible. Naturally some major factors must still be considered because often times bad weather results in lots of wind- something drones cannot handle so well. Also, currently dimensions must be manually programmed into the system before the drones take over. A human must take precise measurements which currently makes real world implementation not feasible at this time. However, the system is proving to be promising and incredibly useful. With a few tweaks the system could one day soon see action in the real world.