Gummy bears are colorful, squishy, and delicious to eat. They also make the perfect candidate for the Hydraulic Press Channel's victim list. The channel is quite possibly one of the most interesting and unintentionally funny channels on YouTube with its only material comprising of- you guessed it- squishing all sorts of materials until some interesting, and sometimes quite hilarious or even explosive results occur. One of the channels most recent uploads is no exception.

Check it out as a dangerous army of potentially lethal gummy bears are taken care of in the most extreme method ever involving a hydraulic press and thousands of pounds of force.

And do not worry, no bears were harmed in the making of this video. Unless, of course, you are a gummy bear in which case I duly apologize.

To analyze the video with some sort of scientific approach and not just as a comedic viewpoint, we can appreciate the heat created that fuses the bears together which may have raised growing concerns of a gummy bear attack by creating a giant alpha that could attack at any time. The bears are actually quite resilient to the press before they turn into a gluttonous sugary mess.

Although the press  has eradicated some of the bear army, there are still major concerns over another attack that may surprise us all. Be sure to not let your guard down, and ensure every safety precaution before you use your method of compression be it by jaw or press. Remember, stay safe out there. 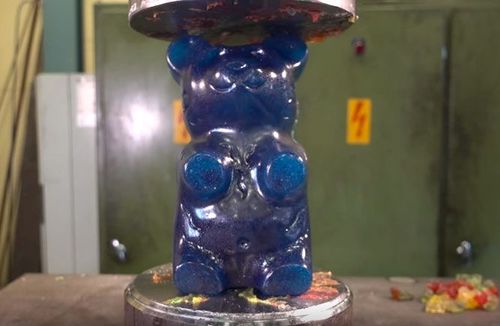