In a process called amalgamation, ductile metals become brittle after being exposed to certain chemical environments. Most notable is the dramatic effect through the physical reaction ensuing after solid metal is exposed to liquid metals.

Aluminum with mercury or gallium provides a specifically fascinating combination in which sees aluminum get completely destroyed by even a small amount of Al or Hg. Although pure aluminum is highly reactive, the metal protects itself through a thin layer of inert transparent oxide (Al2O3) which forms quickly when exposed to air.

The layer, however, can be penetrated by gallium allowing the mercury to similarly penetrate the metal. The liquid metals then amalgamate with the aluminum- a physical process that dissolves one metal into another. In some cases, the liquid metal can penetrate and disperse through solid metal at speeds exceeding 100 cm/s. The physical process disrupts the crystal lattice structure with differing severities depending on the electronegativity of the metal. Nonetheless, the combination of mercury/gallium mixed with aluminum results in a dramatic change in physical properties to the aluminum, resulting in embrittlement.

The process can be devastating t0 structures if the liquid metals are introduced. In airlines, with the structure mostly comprising of aluminum, it would be devastating if mercury or gallium contacted any surface for obvious reasons. It is for this reason that the transportation of gallium or mercury is strictly prohibited on any aircraft.

The effect is an interesting phenomenon which is surprisingly not chemical. The metals simply disrupt the structural components that give the solid strength, interlocking it with a liquid metal which results in the dramatic effect noted. While gallium is non-toxic, it is incredibly important to realize the damage it can inflict, specifically on aluminum components. Nonetheless, it is an incredibly cool experiment to witness the dramatic change of properties in aluminum. 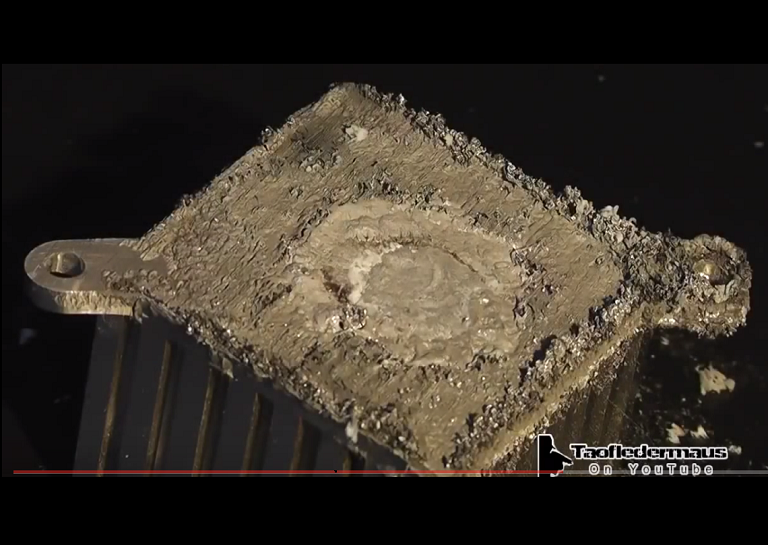 SEE ALSO: You Can Safely Pour This Liquid Metal Onto Your Hands