A suit of NASA instruments captured a unique solar phenomenon that was previously unexplained by astrophysicists. An intense solar eruption was naturally terminated by the Sun’s very own magnetic forces, which could potentially affect space weather conditions around our planet. For the very first time, astrophysicists were able to shed light on the mechanics of this solar phenomenon and explain how it ultimately influence activities on the Sun’s surface.

A near solar eruption was caught in action by several NASA observatories nearly three years ago on September 30, 2014. What was particularly interesting about this solar phenomenon is that the brewing eruption was halted by the Sun’s very own invisible magnetic forces . The various equipment and instruments available during the phenomenon allowed scientists to track the entire sequence of the near solar eruption . But it’s only three years after the event that scientists are able to explain, for the very first time, how the Sun’s magnetic forces ceased the powerful solar burst.

Georgios Chingzoglou, a solar physicist at the Lockheed Martin Solar and Astrophysics Laboratory in Palo Alto, California, and the University Corporation for Atmospheric Research in Boulder, Colorado and lead author of the published paper, explained how the varying instruments used in their observations are critical to track down the Sun’s activity.

“Each component of our observations was very important. Remove one instrument, and you’re basically blind. In solar physics, you need to have good coverage observing multiple temperatures — if you have them all, you can tell a nice story”.

The observed near eruption was basically in a form of a filament or a “serpentine structure consisting of dense solar material”. The filament outwardly projected itself from the surface with intense energy and speed. But before the filament could fully erupt or burst, the Sun’s invisible magnetic forces broke down the structure to pieces. The solar phenomenon was observed in different wavelengths using NASA’s Solar Dynamics Observatory (SDO), Interface Region Imaging Spectrograph (IRIS), JAXA/NASA’s Hinode, and other ground-based telescopes that were put in place to support the launch of the NASA-funded VAULT2.0 sounding rocket. By collectively studying the output from each instrument, scientists were able to understand how the solar eruption was terminated.

“We were expecting an eruption ; this was the most active region on the Sun that day”, said Angelos Vourlidas, an astrophysicist at the Johns Hopkins University. We saw the filament lifting with IRIS, but we didn’t see it erupt in SDO or in the coronagraphs. That’s how we knew it failed”.

Scientists used the data obtained from their observations to create a model of the Sun’s magnetic environment to enable them to understand how the forces affect solar activity. Chintzoglou and his research team came up with a model that highlights locations on the Sun where magnetic forces were particularly compressed. Sudden bursts or eruptions of energy, such as that of the filament, are expected to occur where magnetic field lines are specifically distorted.

Antonia Savcheva, an astrophysicist at the Harvard-Smithsonian Center for Astrophysics in Massachusetts, explained how they developed the Sun’s magnetic topology.

“We computed the Sun’s magnetic environment by tracing millions of magnetic field lines and looking at how neighboring field lines connect and diverge. The amount of divergence gives us a measure of the topology”. 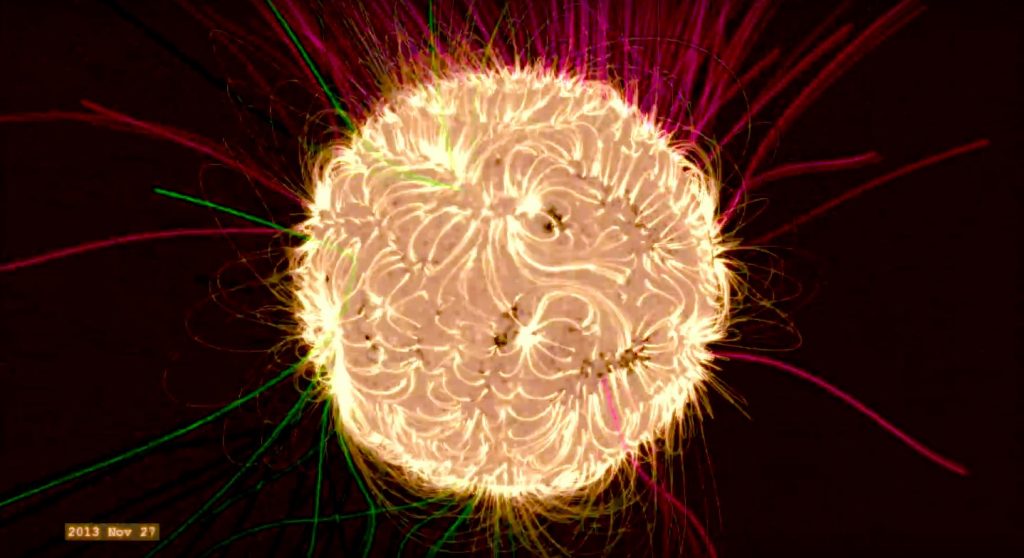 The scientists referred to the Sun’s invisible magnetic forces as the ‘hyperbolic flux tube’, which forms as two bipolar regions on the solar surface collides. The collision results in a network of four alternating and opposing magnetic fields that are capable of releasing intense amounts of stored energy. Chintzoglou explained how the natural solar magnetic forces interfere with the filament’s own magnetic field lines to ultimately break them apart and reconnect the shredded topology with that of the Sun’s .

Understanding how these complex solar phenomenon works gives the scientists an insight on how the Sun’s magnetic forces influence eruptions on its surface. Ultimately, these sudden and intense releases of energy could affect space weather around our planet.

“This tells us that apart from the eruption mechanism, we also need to consider what the nascent structure encounters in the beginning, and how it might be stopped”, said Chintzoglou.

The paper summarizing this study was published in The Astrophysical Journal.