A composite metal foam developed at NC State University is tough enough to resist the force of a bullet, disintegrating it into minute particles upon impact. The foam is lighter than steel metal plating, and will likely see large implementation into aerospace, automotive, and military applications

The foam largely comprised of steel has been in development for five years as conducted by professor of mechanical and aerospace engineering at NC State, Afsaneh Rabiei. The video above demonstrates the incredibly tough characteristics of the CMF as a 7.62 x 63 millimeter M2 armor piercing projectile was shot directly at the metal which inflicted virtually no damage to the plate.

We could stop the bullet at a total thickness of less than an inch, while the indentation on the back was less than 8 millimeters,”

“To put that in context, the NIJ standard allows up to 44 millimeters indentation in the back of an armor.”

The results of the study conducted were published in 2015.

The CMF can be developed in various ways. Essentially, a gas must be introduced into the foam to create the bubbles within. This can be achieved by melting the material and directly injecting a gas into the molten material (see diagram below). Other methods include adding blowing agents which evaporate at a lower temperature, off-gassing in the liquid metal. Pressurized hydrogen can also be used. The end result is a low density, incredibly strong metallic structure.

However, toughness and light materials are not the only desirable traits across all industries. For instance, spacecraft and nuclear waste shipping containers are required to be immensely tough while simultaneously being able to withstand large quantities of heat and other forms of radiation. After another study was conducted later that year, the CMF revealed they are superb at blocking X-rays, gamma rays and neutron radiation while also absorbing the massive amounts of energy in the unfortunate event of a crash.

“This work means there’s an opportunity to use composite metal foam to develop safer systems for transporting nuclear waste, more efficient designs for spacecraft and nuclear structures, and new shielding for use in CT scanners,”

The metal foams are also twice as effective as blocking heat compared to solid metallic counterparts of the same material. The bubbles within the metal act as insulators, only allowing heat to be conducted through the thin walls of the metal, extending the distance the heat travels as it curves and bends around the bubbles. The bubbles also act as shock absorbers, enabling the metal to be compressed more without compromising the structural integrity.

The technology behind the CMFs is only just becoming thoroughly understood. In future applications, many industries could be optimized and made many magnitudes more safe with the implementation of this metallic foam that is strong enough to obliterate an armor piercing round. 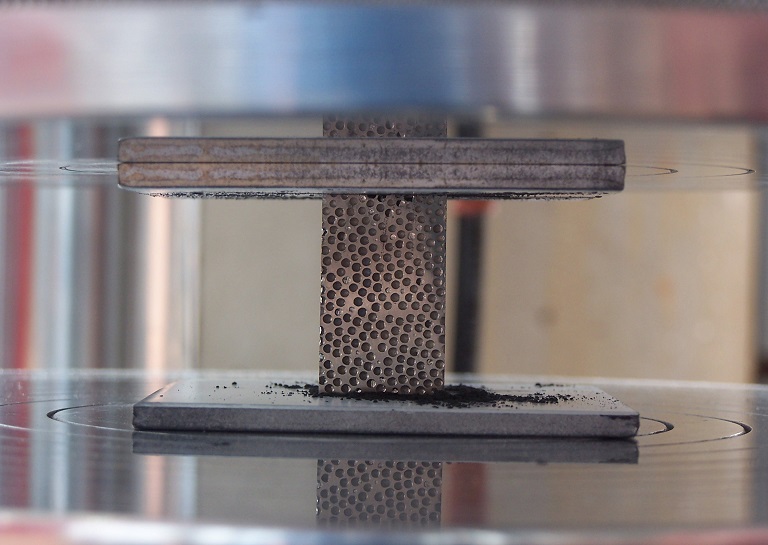