“Power can be, and at no distant date will be, transmitted without wires, for all commercial uses, such as the lighting of homes and the driving of airplanes. I have discovered the essential principles, and it only remains to develop them commercially. When this is done, you will be able to go anywhere in the world — to the mountain top overlooking your farm, to the arctic, or to the desert — and set up a little equipment that will give you heat to cook with, and light to read by. This equipment will be carried in a satchel not as big as the ordinary suitcase. In years to come wireless lights will be as common on the farms as ordinary electric lights are nowadays in our cities." - Nikola Tesla from  “Making Your Imagination Work for You” (The American Magazine, April 1921) 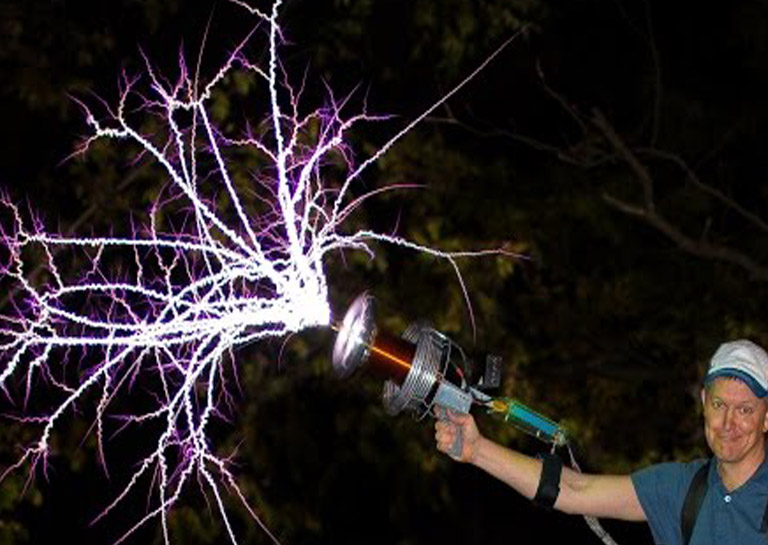 Nikola Tesla was a man of substantial influence and inspiration in the field of peace and science. Serbian-American engineer and physicist Nikola Tesla bestowed the world with today’s widely used alternating-current electrical system and discovered the rotating magnetic field, which stands as the basis for most AC machinery. Though he hasn’t patented much of his inventions, he is renowned and admired by many contemporary pioneers, engineers, DIYers, and science enthusiasts. Among his numerous innovations, Nikola Tesla dreamed of creating a way to supply power wirelessly to the world. This lead to the revolutionary creation of Tesla coil, in 1891. The coil transforms energy into extremely high-voltage charges in the form of electrical arcs.

Inspired by this machine, Nerd Youtuber “Smarter Every Day” has demonstrated in a video, a handheld gun by Cameron, that blasts out a tangled lightning similar to Ghostbusters-style. The pioneer of Tesla Gun is Cameron B. Prince is an admirer of Nikola Tesla inventions, a hardcore enthusiast, and also the founder of a website called Tesla Universe, with a mission to provide the most complete and accurate information about Nikola Tesla on the Internet and to encourage high voltage experimentation. Not only an impressive website, he also has some homemade versions of Tesla’s designs, like a nine-foot tall Tesla coil.

But the star of his show is the Tesla Gun. He built the gun based on a kit designed by his friends Steve Ward and Phillip. Tesla gun is a cool machine designed out of Tesla’s coil, which can be held right in your hand.

The Tesla Gun comes with a backpack providing battery storage, CPU and power supply circuits pistol grip mounted Tesla coil. However, the power supply circuitry is water-cooled and is capable of running continuously for several minutes. Under non-continuous operation, it can run up to several hours. This portable and self-contained lighting machine are capable of producing nearly 6-foot (2-meter) spark lengths. The produced sparks can be varied in length, frequency, and pulse-rate due to an advanced control circuitry. However, the sparks aren’t painful at lower power levels; if you would like to feel the sparks. The gun can be used to ignite Hydrogen-filled balloons, or directed into a grounded rod to roast marshmallows or hot dogs. The Tesla Universe supplies Tesla coils, Tesla guns, and Faraday Suit to rent.

Prince himself states that the current of the gun is low enough that it shouldn’t cause any problems with vital human functions like heartbeat, though it’s always better to be safe. Amazingly, Destin, who filmed Prince and his device on high-speed camera in the webisode, allowed himself to be hit by the stream of sparks coming from the gun but warned viewers not to do the same at home. “This is full on Ghostbuster stuff,” quotes Destin, which can be heard saying in the footage.

And here’s the Tesla Gun:

[Via: Smarter Every Day]