LG have been showing off an 18 inch OLED (Organic Light Emitting Diode) screen with the ability to bend back and forth on itself whilst still playing video. Maybe they could strike up a deal with Apple for the bendgate problem. 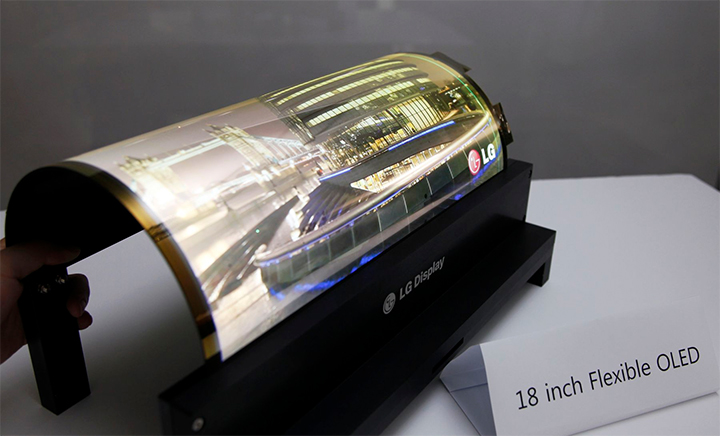 Curved screens are already on the market but nothing to this extent. OLED screens have an organic semiconductor layer between two electrodes which responds to electric current by emitting light. This means that there is no backlight, allowing the screen to be  lot thinner than an LCD screen whilst also allows for deeper black levels.

In the first of the two videos, a demonstrator shows the bendability of an 18 inch OLED screen whilst it is playing video. The on screen image is also of reasonable quality confirming that this is not just a gimmick - at 1280 x 810 they can handle 720p HD output. According to LG, the flexibility is thanks to the use of a polyimide film instead of conventional plastic.

"LG Display used high molecular substance-based polyimide film as the backplane of the flexible panel instead of conventional plastic to achieve the maximum curvature radius. The polyimide film also helped reduce the thickness of the panel to significantly improve its flexibility," says their website.

You may recognise polyimide as the material used for the ribbon that attaches your laptop display to the motherboard. The screen can rolled tightly into a cylinder of 3 cm radius. Imagine being able to pull an 18 inch HD screen out of your bag just like a newspaper.

The second video shows of an 18 inch transparent LED screen offering 30% transmittance thanks to their transparent pixel technology, which they don't really elaborate upon. Currently available transparent LCD screens offer a transmittance of about 10%. The screen also comes with the same 1280 x 810 resolution as its flexible brother.

LG are promising a 60-inch version by 2017 that will be both flexible and transparent and will come with UHD (4k, 3840 x 2160) resolution. According to the head of R&D at LG Display, these twin advances will allow LG to “[lead] the future display market.” No idea on a release price but we imagine initial prices could have you choosing between a new car and a tv.