A robot dressed up as a dog and SpotMini make new friends at IROS2018.

Boston Dynamics have once again proven they are one of the most unusual robot engineers out there by sharing some footage from IROS2018 of one of their famous inventions disguised as a dog. The unsuccessful costume attempt involved pinning a pillow with a print of a dog's face on to the front of the robot.

The same video also shows the very cute SpotMini meeting and making some new robotic friends. Boston Dynamics is famous for its four-legged robots that appear to have true animalistic instincts and qualities.

During #iros2018 we found: robot disguised as a dog (unsuccessfully) and Spot Mini trying to communicate with "Friends"

Watching the Spot Mini investigate its potential new friends by reaching, touching and turning its ‘head/claw’ is both creepy and cute. IROS2018 or the International Conference on Intelligent Robots and Systems is the premier conference in the field of robotics.

IROS2018 asks what a robotic society will look like

The five-day event attracts researchers, scientist, engineer as well as companies and end-users. The 2018 conference is currently being held in Madrid Spain. This year's theme is “Towards a Robotic Society” and has a focus on looking towards what changes will occur as robots become a more common part of our daily lives.

The conference has plenary’s keynotes and workshops with a common direction of thinking through how new human-robot relationships will lead to a new society. As well as presenting lots of robot innovations, the conference is focusing on the societal aspects of a robotic world including space for reflection on legal issues, regulations, robotics ethics, human-robot co-existence, and employment.

Boston Dynamics are no stranger to ethics-related questions about robots. The Boston based firm makes a range of robots designed to interact closely with humans.

SpotMini is both creepy and cute

The SpotMini featured in their Instagram post is a little four-legged robot that the company says ‘comfortably fits in an office or home.’

SpotMini is all electric and can do tasks for 90 minutes on a single charge. Its 5 degree-of-freedom arm lets it pick up and handle objects while its full array of sensors allows the SpotMini to get around and compute new environments. 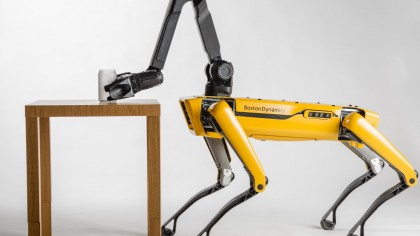 The SpotMini is most famous for being featured in a video that showed it opening a door by itself in the Boston Dynamics lab. The much-watched YouTube video shows the SpotMini locate, recognize, and then operate a door handle, the friendly robot then holds the door open for its armless friend to pass through.

The video both delighted and frightened the internet. Depending on your standpoint, either the killer robots are winning or you’ll never need to open another door for yourself again.

Boston Dynamics is owned by SoftBank, a Japanese telecommunications and technology company who bought the envelope-pushing company from Alphabet for $100 million dollars last year.