The ESA have released footage of two meteorites making dramatic contact with the moons surface.

Incredible footage of two meteorites making contact with the surface of the moon has just been released by the European Space Agency. In the video, you can see two distinct flashes as the meteorite crashes into our closest celestial neighbor.

Despite the seemingly violent encounter, scientists say the meteorites may have only been the size of a walnut. The collisions occurred in July, 24 hours apart from one another, and were captured by a powerful telescope system, based in Spain.

The flashes were detectable from earth despite their small size, thanks to the well-trained eye of the telescope. Scientists from the European Space Agency (ESA) say the meteoroids were fragments of the midsummer Alpha Capricornids meteor shower.

The moon was hit by the meteorites as it passed through the end tail of Comet 169P/NEAT. "For at least a thousand years, people have claimed to witness short-lived phenomena occurring on the face of the moon. By definition, these transient flashes are hard to study, and determining their cause remains a challenge." ESA officials said in the statement. 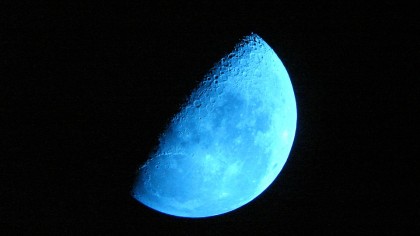 The Reason Why We Say "Once in a Blue Moon"

The action was captured by the Moon Impacts Detection and Analysis System (MIDAS), which is located on three separate observatories across Spain. The system is equipped with high-resolution CCD video cameras designed to pick up these subtle flashes of light.

These rare flashes are even easier to spot if they occur during a lunar eclipse, like the one that occurred on July 27th this year.

The first attempts at really systematically capturing and analyzing impact flashes dates back to the first use of CCD cameras in 1997. Researchers saidthat in addition to providing really important information about the moon and its relationship to other celestial objects, impacts like these also open up opportunities to investigate other meteorite impacts on other locations in the solar system.

"By studying meteoroids on the moon, we can determine how many rocks impact it and how often, and from this we can infer the chance of impacts on Earth," Jose Maria Madiedo, a member of MIDAS and a meteorite researcher at the University of Huelva in Spain, explained.

One of the Largest Moon Rocks Found on Earth Is for Sale at $2.5 Million

Lunar Facts: The Moon Is an Odd and Fascinating Place