Last month, we got to watch a big black hole burp for the second time in about 100,000 years.

Black holes, the massive singularities formed by the collapse of stars at the end of their life cycle, are known for consuming everything in their path. For something that eats so much, it only makes sense that they would burp now and then.

Luckily, we recently got to watch a big black hole burp for the second time in about 100,000 years.

What does it mean when a black hole burps, and what can it teach us about the universe we live in?

What Is a Black Hole Burp?

Black holes, by their nature, consume everything around them. Their massive gravitational forces pull all nearby energy and physical matter into a decaying orbit, creating what is known as an accretion disc.

Sometimes, this accretion disc contains gasses and highly energized particles. While the particles are being consumed by the singularity, they sometimes react and create an outflow of energized particles. To an X-ray telescope, it looks like a geyser of energy and is referred to as a “black hole burp.”

A Galaxy Far, Far Away

The black hole that keeps belching is located more than 800 million light-years away from our own Milky Way Galaxy. It sits at the center of a galaxy dubbed J1354, and over the course of roughly 100,000 years, the black hole has burped not once, but twice.

This particular singularity has a pattern that scientists have been able to observe for the first time — it feasts on incoming material and energy, burps and then enters a rest phase before feasting again. While we've seen single burps in the past and predicted multiple burps, this is the first time that we've observed multiple burps from a single black hole.

J1354’s black hole has enjoyed a massive two-course meal over the last 100,000 years thanks to two galaxies that have collided with its home galaxy. The feeding and resting cycles have been equated to a human burping after a large appetizer to make room for the next course.

100,000 years between meals might seem like a long time. But when you compare it to the age of the universe, which is roughly 13.8 billion years old, 100,000 years is equivalent to the time you wait between courses of your favorite meal.

A Little Closer to Home

We have our own supermassive black hole that sits in the center of the Milky Way Galaxy. The discovery of a black hole letting out multiple belches after a feeding cycle teaches us a lot about our home galaxy.

The singularity that rests in the center of our home galaxy is currently in a resting phase after its last massive belch. This discovery lets us know that sometime in the future, it will start feasting again. Once it has eaten its fill, it will release another enormous burp similar to J1354’s.

Watching a black hole devour a star is one of the most dramatic and arguably beautiful events in the universe. They’re officially known as stellar tidal disruption events, and they occur when a star gets too close to the event horizon of a black hole. 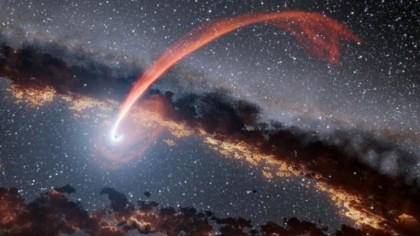 Once the star is caught in the singularity’s gravitational field, it begins to be torn apart by massive gravitational forces. This process is known as spaghettification. No, we didn’t just make that word up. It was invented because torn stars look like interstellar spaghetti. Really, we promise — it’s the official astronomic term for the event.

The consumption of stars and the planets they support also contributes to the massive burps that are created by black holes once they’ve eaten enough. These spaghettified stars may also provide clues to help us understand how new stars are formed.

We may never have a full understanding of how our universe was formed, but by studying black holes and their idiosyncrasies, we may be able to gain a better understanding of our home galaxy and even the planet where we were born.