As athletes compete at the Winter Olympic Games, robots were not far away from having their own ski race - with hilarious results.

The Winter Olympics in South Korea has provided lots of opportunity for open-mouthed amazement. Aside from the amazing sports there also been a historic relative easing of tension between North and South Korea thanks to a visit from the North Korean leader, Kim Jong-un's sister.

Yesterday there was another event that shocked and amazed us, but not for quite the same reasons. The Ski Robot challenge was held at Welli Hilli resort in Hoengseong, about an hour away from the real Olympic action.

The event saw robot developers face off against each other as they put their latest robot creations to a downhill ski run. While the gallant robots did their best, the event is basically a showreel of robot bloopers. Which feels like exactly what we need right now considering Boston Dynamics scared the hell out of us yesterday with the creepy door opening robot.

Instead of elite athletes, yesterday's competitors were teams representing universities, institutes, and private companies all fighting for the 10,000 USD prize money.

The robots were not worried about the poor weather conditions that have so far plagued the Olympics.

“I heard the Alpine skiing has been postponed again due to wind conditions. That’s a pity,” said Lee Sok-min, a member of the winning TAEKWON-V team. “Robots are doing fine here.”

Fast and the Furious

The robots had to fulfill several criteria to be allowed into the contest. First, they had to be more than 50 cm in height and able to stand on their own two legs.

Each robot was required to have an independent power system and joints that allow them to bend their knees and elbows. The robots were allowed to use skis and poles to help them around the course.

The challenge consisted of a course dotted with flags. Robots used embedded sensors to detect the flag's location and move around the course.

Points were awarded to the robots that could avoid the highest number of flags in the shortest time. Many of the competing robots did make it to the finish line falling just meters after starting their descent.

The competition was eventually won by Taekwon V from Mini Robot who successfully navigated 5 gates just in 18 seconds.

The extremely cold weather proved to be a huge hurdle for the sensitive electronics required to get the robots up and skiing.

Putting robots to the test in sporting events isn’t new. There are a number of weird leagues around the world that get robots to play games, or simply fight each other. 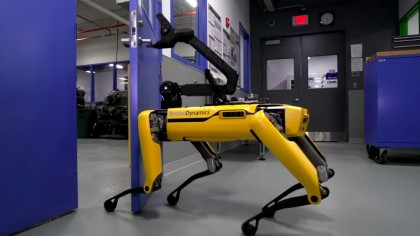 The most successful or at least possibly biggest league is RoboCup, the annual robotic soccer competition Veloso co-founded in 1997. The cup sees robots of all different sizes play a weird version of soccer robot.

Again lots of RoboCup is about watching robots fall over. But you have to admit they are doing a pretty awesome job considering just how often human soccer players also fall.