Watkin's Tower: How England Tried to Get Its Own Eiffel Tower, But Couldn't Build It

Watkin's Tower, if completed, would have not only rivaled the Eiffel Tower but dwarfed it. Construction began on the site of today's Wembley stadium in dying days of the 19th Century but technical and financial problems would ultimately doom the project to failure.

When the Eiffel Tower was officially inaugurated in 1889, some across the channel looked on with envy rather than awe. These men decided to set in motion a plan to put the French in their place with a tower grander in scale than its continental rival.

Why build the Watkin's Tower?

The Watkin's Tower was a plan by a group of Englishmen for London to have its own tower similar to the Eiffel Tower in Paris in the later 19th Century. A competition for the "Tower of London" was held in 1890 which received 68 interesting concept designs. 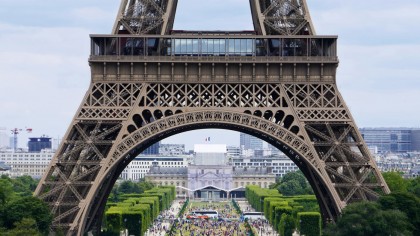 Construction was commenced soon after the completion of the competition, but technical problems led to the tower's final demolition.

The decision to build the Watkin's Tower was not just a matter of national pride. The Eiffel Tower was a lucrative investment making large sums of money on entrance fees, restaurant and shop takings.

It was so successful, in fact, that it had already made back its construction cost. According to the Watkin's Tower competition preface, net takings during its inauguration amounted to £260,000. Construction costs amounted to around £280,000.

If London could build its very own version, perhaps it could benefit greatly from the increased trade from tourism.

About Edward Watkin, the man with the idea

The project was proposed by Sir Edward Watkin who was an MP with a long history of running train companies.

He was even involved in a failed venture to build a channel tunnel. Watkin was also instrumental in the recent construction of the Metropolitan Railway, now known as the London Underground's Metropolitan line.

Finding a designer for the Watkin's Tower

Gustave Eiffel was initially consulted to help with the tower's design but he soon declined. And so it was that a competition was run to find a winning design for the tower.

The rules of the competition required any potential design to be a minimum of 1,200 feet (366 meters) tall. This would dwarf the Eiffel Tower by at least 200 feet (61 meters).

Designs were sent in from all around the world with some particularly interesting concepts. Many of the designs were very similar to the Eiffel Tower with others incredibly imaginary indeed.

In the end, Design No. 37 by engineer A. D. Stewart and architects J. M. Maclaren and W. Dunn, of London, were chosen.

They were summarily awarded the 500-guinea prize money.

The tallest tower London would have seen

Their design was described as being of "oriental character" and would stand, once completed at the desired 1,200 feet (366 meters). This was revised down to 1,175 feet (358 meters) tall once construction began.

Despite its smaller stance, it would have been the tallest structure in London. It would even dwarf the Shard that stands at 1,106 feet (337 meters).

At the time, once complete, it would have been ten times taller than the then tallest building, St Paul's Cathedral. The Watkin's Tower was to be more spacious and greater in height than the Eiffel Tower.

It was also planned to have a selection of special facilities such as restaurants, a Theatre, Shops, Turkish Baths, Promenades, Winter Gardens and "a variety of other amusements".

Like its French cousin, the tower would have had elevators for visitors and was intended to have an Observatory and other rooms for scientific experiments on the top level.

The "Great Tower of London" or "Watkin's Tower" was to be built soon after at the chosen site in Wembley Park. The ground was broken in 1892 but the construction company, The Metropolitan Tower Company, soon ran into problems.

Construction began to rapidly fall behind schedule due to the marshy ground on the chosen site. The project also ran into investment problems that would lead to an ever more simplified design.

These revisions would affect the buildings structural stability. Despite this, the first phase of construction was completed and opened to the paying public in 1896.

The 47-meter structure didn't prove popular with the public. The much-needed revenue from visitors failed to materialize.

This and other financial problems also eventually led to the eventual liquidation of the company.

The Watkin's Tower was left uncompleted for some years afterwards and would remain a spectacle in the park for a number of years. After retiring and suffering a stroke, the project's champion, Edward Watkin, passed away in 1901 and the sight was closed after the public lost interest in it.

The abandoned tower would come to be known as "Watkin's Folly" or the "London Stump". It was finally demolished in 1904 when it was deemed unsafe.

The site of the former Watkin's Tower was re-developed in 1923 with the construction of the Wembley Stadium for the British Empire Exhibition. When the stadium was rebuilt in 2000, the old tower's concrete foundations were rediscovered.

If you are in the area the whole affair is commemorated in the name of a local pub, The Watkins' Folly.

Shoot to the Stars: 15 Facts About the Fascinating Space Elevator Concept